A Kingdom Besieged: Book One of the Chaoswar Saga (Mass Market) 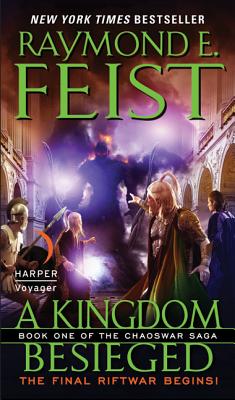 A Kingdom Besieged: Book One of the Chaoswar Saga (Mass Market)

This is book number 1 in the Chaoswar Saga series.

“Feist has the universe firmly under his control.”
—Contra Costa Times

“Feist has a natural talent for keeping the reader turning pages.”
—Chicago-Sun Times

Midkemia’s fifth and final Riftwar—the devastating Chaoswar—explodes in the opening volume of Raymond E. Feist’s spectacular new epic fantasy trilogy of magic, conflict, and world-shattering peril. A Kingdom Besieged is a breathtaking adventure that brings back Pug—first introduced in Feist’s classic debut novel, Magician, and now Midkemia’s most powerful sorcerer—who faces a major magical cataclysm that forces him to question everything he’s ever held as true and dear…including the loyalty of his beloved son Magnus. The Chaoswar promises to be the crowning achievement in the three decades-long career of a New York Times bestselling master fantasist who rules the sword and sorcery universe along with Terry Goodkind, George R. R. Martin, and Terry Brooks.

Raymond E. Feist is the author of more than thirty previous books, including the internationally bestselling “Riftwar Cycle” of novels set in his signature world of Midkemia, as well as a standalone novel, Faerie Tale. The Firemane Saga is his first all-new epic fantasy series. He lives in San Diego, California.

“Originality and wit a rollicking tale Feist’s narrative skill, ingenuity at creating systems of magic, and eye for plausible militaryscenarios stand him in good stead. His many fans will be pleased.” — Booklist

“[Feist] introduces a new dimension to his universe and added new depth to recurring characters while creating fascinating new heroes and villains. With a fast pace and clean, crisp storytelling, this fantasy saga belongs in most libraries.” — Library Journal

“A promising start to what looks like a strong, dire trilogy of fantastic adventure.” — San Diego Union-Tribune

“Fast action, appealing characters, and a splendid setting will delight readers of fantasy and leave them eager for the next battle.” — Kirkus Reviews

“There’s an evil sparkle here, brighter and hotter than any of Feist’s works since the Magician trilogy. The Dasati and their world are sumptuously realised . . . It’s an entertaining, at times intoxicating mixture.” — SF Site

“Originality and wit... A rollicking tale... [Feist’s] narrative skill, ingenuity at creating systems of magic, and eye for plausible military scenarios stand him in good stead. His many fans will be pleased.” — Booklist

“Feist has a natural talent for keeping the reader turning pages.” — Chicago-Sun Times

“[A] compelling and profoundly moving tale… an invaluable addition to a beloved canon.” — barnesandnoble.com

“This tale of shape-shifting magicians, human sacrifice, man-eating demons, and a little young love will satisfy Feist’s fans, and the ending will leave them waiting for another volume.” — Publishers Weekly

“A sensitive coming-of-age tale in which brutality and camaraderie are equally present, Feist’s newest saga has a freshness of vision that suggests it will avoid the staleness that often eats away at multi-volume epics.” — Publishers Weekly

“A story of redemption and heroism featuring an unlikely hero . . . This classic fantasy should find a welcome audience among the author’s fans.” — Library Journal

“A great read and a wonderful addition to Feist’s collection.” — SF Site

“An action-packed story of intrigue and betrayal.” — Library Journal

“As usual, Feist brings this off wonderfully.” — Science Fiction Chronicle

“Another crowd-pleaser for Feist to add to his already impressive resume.” — Publishers Weekly on King of Foxes

“Feist has the universe firmly under his control, and the adventure is grand[.]” — Contra Costa Times

“Feist is at his best.” — Science Fiction Chronicle

“Originality and wit . . . A rollicking tale . . . Feist’s narrative skill, ingenuity at creating systems of magic, and eye for plausible military scenarios stand him in good stead. His many fans will be pleased.” — Booklist

“In the forefront of contemporary fantasy adventure.” — Library Journal

“FUN . . . A place to start for those yet to discover Feist’s fantasy worlds.” — Locus

“Fine entertainment . . . Feist works his signature magic . . . an absorbing and carefully crafted adventure with pleasing density of plotting, good characterization . . . this is populist Dickens out of Tolkien, and it works.” — Sydney Morning Herald

“Sure to please Feist fans and win new ones.” — Publishers Weekly

“This simple, charming fairy tale will appeal to adult fans of the Riftwar books as well as mature teens who don’t mind a bit of romance in their sword-and-sorcery.” — Publishers Weekly

“This is a series that gets better as it goes along.” — Science Fiction Chronicle

“With his storytelling mastery and ear for colorful language and nuance, the author of numerous books set in the dual worlds of Midkemia and Kelewan here launches a series that takes his fantasy universe into a whole new phase. ” — Library Journal

“The prose is smooth, the plot is exactly what you’d expect and the characters do exactly what Feist tells them . . . File under guilty pleasure.” — The Guardian

“The most interesting character in the saga to date, Kaspar . . . another complicated and compelling protagonist . . . [W]ill have Feist fans eagerly awaiting the next installment.” — Publishers Weekly