The Witches of St. Petersburg: A Novel (Paperback) 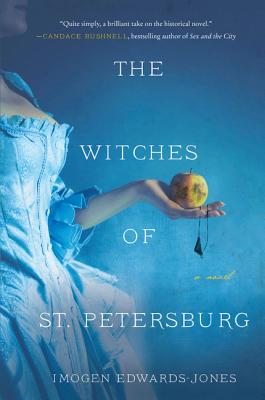 The Witches of St. Petersburg: A Novel (Paperback)

“Readers fascinated with the Romanovs and this tumultuous period in Russian history will be enthralled by this deliciously dark and memorable novel.” —Publishers Weekly

Inspired by real characters, this transporting historical fiction debut spins the fascinating story of two princesses in the Romanov court who practiced black magic, befriended the Tsarina, and invited Rasputin into their lives—forever changing the course of Russian history.

As daughters of the impoverished King of Montenegro, Militza and Stana must fulfill their duty to their father and leave their beloved home for St. Petersburg to be married into senior positions in the Romanov court. For their new alliances to the Russian nobility will help secure the future of the sisters’ native country. Immediately, Militza and Stana feel like outcasts as the aristocracy shuns them for their provincial ways and for dabbling in the occult. Undeterred, the sisters become resolved to make their mark by falling in with the lonely, depressed Tsarina Alexandra, who—as an Anglo-German—is also an outsider and is not fully accepted by members of the court. After numerous failed attempts to precipitate the birth of a son and heir, the Tsarina is desperate and decides to place her faith in the sisters’ expertise with black magic.

Promising the Tsarina that they will be able to secure an heir for the Russian dynasty, Militza and Stana hold séances and experiment with rituals and spells. Gurus, clairvoyants, holy fools, and charlatans all try their luck. The closer they become to the Tsarina and the royal family, the more their status—and power—is elevated. But when the sisters invoke a spiritual shaman, who goes by the name of Rasputin, the die is cast. For they have not only irrevocably sealed their own fates—but also that of Russia itself.

Imogen Edwards-Jones is an award-winning journalist, novelist, and screenwriter. She is the author of the bestselling Babylon series of industry exposés, which sold over a million copies worldwide. The first book in the series, Hotel Babylon, was adapted into the returning prime time BBC1 TV series.  Author of over twenty other books, she is the editorial consultant on Julian Fellowes' Belgravia. She read Russian at Bristol University and has traveled extensively in the old Soviet Union, writing the travel book, The Taming of Eagles: Exploring New Russia. She lives in London, is member of the London College of Psychic Studies and an honorary Cossack.

“Even if you are not a Russian scholar like Imogen Edwards-Jones, you will immediately be drawn into this true-life tale of two little known Montenegrin princesses who ruled Russian society at the turn of the last century, befriended Nicholas and Alexandra and the most famous man in Russia—the sexually rapacious Rasputin. With precision and razor-sharp accuracy, Edwards-Jones chronicles their lives—right up to the chilling last scene which will have you heading straight to Wikipedia. Quite simply, a brilliant take on the historical novel.”  — Candace Bushnell, bestselling author of Sex and the City

“Readers fascinated with the Romanovs and this tumultuous period in Russian history will be enthralled by this deliciously dark and memorable novel.” — Publishers Weekly

“With swashbuckling fervor, journalist and author Imogen Edwards-Jones blends themes of power, magic, and sex in her new novel, The Witches of St. Petersburg, creating a florid portrait of the last decade of the Romanov era.” — Washington Independent Review of Books