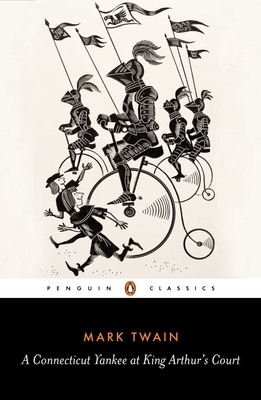 
Unavailable
When Connecticut mechanic and foreman Hank Morgan is knocked unconscious, he wakes not to the familiar scenes of nineteenth-century America but to the bewildering sights and sounds of sixth-century Camelot. Although confused at first and quickly imprisoned, he soon realises that his knowledge of the future can transform his fate. Correctly predicting a solar eclipse from inside his prison cell, Morgan terrifies the people of England into releasing him and swiftly establishes himself as the most powerful magician in the land, stronger than Merlin and greatly admired by Arthur himself. But the Connecticut Yankee wishes for more than simply a place at the Round Table. Soon, he begins a far greater struggle: to bring American democratic ideals to Old England. Complex and fascinating, A Connecticut Yankee is a darkly comic consideration of the nature of human nature and society.

For more than seventy years, Penguin has been the leading publisher of classic literature in the English-speaking world. With more than 1,700 titles, Penguin Classics represents a global bookshelf of the best works throughout history and across genres and disciplines. Readers trust the series to provide authoritative texts enhanced by introductions and notes by distinguished scholars and contemporary authors, as well as up-to-date translations by award-winning translators.
Mark Twain is the pseudonym of Samuel Langhorne Clemens (1835 - 1910). Mark Twain was always nostalgic about his childhood and in 1876 The Adventures of Tom Sawyer was published, based on his own experiences. The book was soon recognised as a work of genius and eight years later the sequel, The Adventures of Huckleberry Finn, was published.
"Twain is the funniest literary American writer. . . . [I]t must have been a great pleasure to be him."
--George Saunders