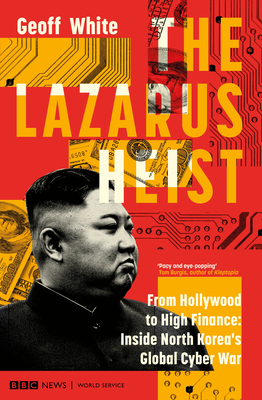 
Usually Ships in 1-5 Days
The jaw-dropping story behind North Korea's dangerous cyber-criminals, the Lazarus Group, who hacked Hollywood and the world

Meet the Lazarus Group, a shadowy cabal of hackers accused of working on behalf of the North Korean state.

They are one of the most effective criminal enterprises on the planet, having stolen more than $1bn in an international crime spree. Their targets include central banks, cryptocurrency companies, film studios and even the British National Health Service.

In this jaw-dropping, global investigation, journalist Geoff White examines how the North Korean regime has harnessed cutting-edge technology to launch a decade-long campaign of brazen and merciless raids on its richer, more powerful adversaries.

From the bustling streets of Dhaka, to the glamorous studios of Hollywood, to the glittering casinos of Macau and the secretive dynastic court of Pyongyang, this is the shocking story of the world's most devastating hackers, their victims and the people who have tried - and ultimately, failed - to stop them.
Geoff White is one of the UK's leading technology journalists and a global specialist on cyber-crime. He has reported on the Snowden leaks, investigated the hacking of Britain's largest internet service provider TalkTalk, exposed fraud in the online dating industry, and won multiple awards. His work has appeared in outlets including Channel 4 News, the BBC and The Sunday Times.

His podcast series The Dark Web has been a top-ten hit on Audible since its launch in 2017 and his latest podcast, The Lazarus Heist which he co-hosted with Jean Lee for the BBC World Service, was number one.
Cyber warfare and criminal hacking has never been more pertinent. This a must read to understand the threats currently facing all of us globally - Annie Machon, author of Spies, Lies and Whistleblowers

This is a mindbending investigation into how the so-called hermit kingdom hacks, cheats, steals and extorts money from the rest of us. You'll never see North Korea the same way again - Oliver Bullough, Sunday Times bestselling author of Moneyland and Butler to the World

Geoff White's thorough investigation reads as part detective story, part thriller, but scary since it is all true. He exposes North Korea as a pariah State where ruthless dictatorship joins forces with international cyber crime. A compelling account of a 21st century threat to us all - Professor Sir David Omand, former head of GCHQ and author of How Spies Think

North Korea is one of the world's least understood countries. By uncovering key details about the innovative methods of the Lazarus Group, and richly detailing its operations, Geoff White has performed a crucial service in our conception of the criminal state that is North Korea. Read this book! - Isaac Stone Fish, author of America Second: How America's Elites Are Making China Stronger

In this captivating gem of a book, Geoff takes us on a whirlwind global adventure that covers the events around a fascinating and important cyber attack that we all should be aware of - Jack Rhysider, founder of Darknet Diaries

One of the most incredible cyber-espionage stories I've ever heard, told by one of the UK's best tech journalists - Jamie Bartlett, author of The Missing Crypto Queen