The Eight: A Novel (Paperback) 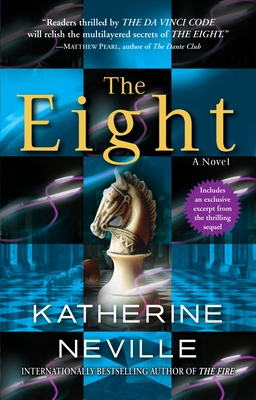 The Eight: A Novel (Paperback)


Usually Ships in 1-5 Days
New York City, 1972—A dabbler in mathematics and chess, Catherine Velis is also a computer expert for a Big Eight accounting firm. Before heading off to a new assignment in Algeria, Cat has her palm read by a fortune-teller. The woman warns Cat of danger. Then an antiques dealer approaches Cat with a mysterious offer: He has an anonymous client who is trying to collect the pieces of an ancient chess service, purported to be in Algeria. If Cat can bring the pieces back, there will be a generous reward.

The South of France, 1790—Mireille de Remy and her cousin Valentine are young novices at the fortresslike Montglane Abbey. With France aflame in revolution, the two girls burn to rebel against constricted convent life—and their means of escape is at hand. Buried deep within the abbey are pieces of the Montglane Chess Service, once owned by Charlemagne. Whoever reassembles the pieces can play a game of unlimited power. But to keep the Game a secret from those who would abuse it, the two young women must scatter the pieces throughout the world. . . .
Katherine Neville is the author of The Eight, The Magic Circle (a USA Today bestseller), and A Calculated Risk (a New York Times Notable Book). The Eight has been translated into more than thirty languages. In a national poll in Spain by the noted journal El País, The Eight was voted one of the top ten books of all time. Neville lives in Virginia and Washington, D.C.
“Readers thrilled by The Da Vinci Code will relish the multi-layered secrets of The Eight.”
—MATTHEW PEARL, author of The Dante Club

“A fascinating piece of entertainment that manages to be both vibrant and cerebral . . . Few will find it resistible.”
—Los Angeles Times Book Review