Zapata and the Mexican Revolution (Paperback) 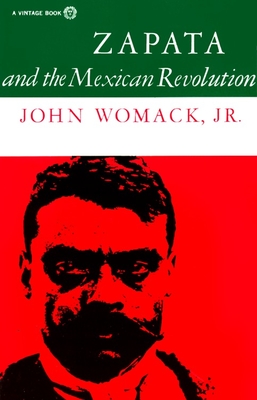 Zapata and the Mexican Revolution (Paperback)


Usually Ships in 1-5 Days
This essential volume recalls the activities of Emiliano Zapata (1879-1919), a leading figure in the Mexican Revolution; he formed and commanded an important revolutionary force during this conflict. Womack focuses attention on Zapata's activities and his home state of Morelos during the Revolution. Zapata quickly rose from his position as a peasant leader in a village seeking agrarian reform. Zapata's dedication to the cause of land rights made him a hero to the people. Womack describes the contributing factors and conditions preceding the Mexican Revolution, creating a narrative that examines political and agrarian transformations on local and national levels.
John Womack, Jr., was born in 1937 in Norman, Oklahoma. He attended Harvard University, where he was a Phi Beta Kappa and graduated summa cum laudein 1959. He was a Rhodes Scholar at Oxford from 1959-1961, then returned to Harvard and received his Ph.D. in history in 1965. Mr. Womack is the Robert Woods Bliss Professor of Latin American History and Economics, Emeritus, at Harvard University.
"The best piece of narrative history that has been written about modern Latin America in any language."--Ernest R. May