Dollface: A Novel of the Roaring Twenties (Paperback) 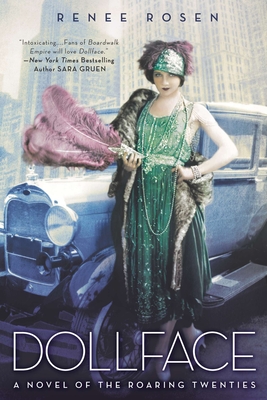 Dollface: A Novel of the Roaring Twenties (Paperback)

America in the 1920s was a country alive with the wild fun of jazz, speakeasies, and a new kind of woman—the flapper.

Vera Abramowitz is determined to leave her gritty childhood behind and live a more exciting life, one that her mother never dreamed of. Bobbing her hair and showing her knees, the lipsticked beauty dazzles, doing the Charleston in nightclubs and earning the nickname “Dollface.”

As the ultimate flapper, Vera captures the attention of two high rollers, a handsome nightclub owner and a sexy gambler. On their arms, she gains entrée into a world filled with bootleg bourbon, wailing jazz, and money to burn.  She thinks her biggest problem is choosing between them until the truth comes out. Her two lovers are really mobsters from rival gangs during Chicago’s infamous Beer Wars, a battle Al Capone refuses to lose.

The heady life she’s living is an illusion resting on a bedrock of crime and violence unlike anything the country has ever seen before. When the good times come to an end, Vera becomes entangled in everything from bootlegging to murder. And as men from both gangs fall around her, Vera must put together the pieces of her shattered life, as Chicago hurtles toward one of the most infamous days in its history, the St. Valentine’s Day Massacre.

READERS GUIDE INCLUDED
Renée Rosen is the author of Every Crooked Pot, a young adult novel. Dollface: A Novel of the Roaring Twenties is her first adult work of fiction. She lives in Chicago where she is at work on a new novel.
"Dollface is as intoxicating as the forbidden liquor at the heart of it. Rosen’s Chicago gangsters are vividly rendered, and the gun molls stir up at least as much trouble as their infamous men. Fans of Boardwalk Empire will love Dollface. I know I did."—Sara Gruen, New York Times bestselling author of Water For Elephants

“With the rat-a-tat tempo of a Tommy gun, Rosen delivers a smart and snappy shot of Roaring Twenties drama.”—Booklist

“Renee Rosen has combined her daring and vivid imagination with the rich history of Prohibition-era Chicago. Dollface is a lively, gutsy, romp of a novel that will keep you turning pages.”—Karen Abbott, New York Times Bestselling author of Sin in the Second City

"Rosen, author of the YA novel Every Crooked Pot, has done her homework and written a flashy story that is more than your average gangster noir. Those interested in novels set in the 1920s and all things Gatsby will not be disappointed."—Library Journal  (Starred Review)