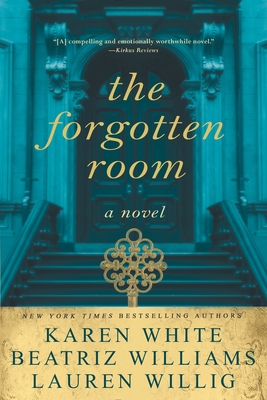 1945: When critically wounded Captain Cooper Ravenel is brought to a private hospital on Manhattan’s Upper East Side, young Dr. Kate Schuyler is drawn into a complex mystery that connects three generations of women in her family to a single extraordinary room in a Gilded Age mansion.

Who is the woman in Captain Ravenel’s miniature portrait who looks so much like Kate? And why is she wearing the ruby pendant handed down to Kate by her mother? In their pursuit of answers, they find themselves drawn into the turbulent stories of Olive Van Alan, driven in the Gilded Age from riches to rags, who hired out as a servant in the very house her father designed, and Lucy Young, who in the Jazz Age came from Brooklyn to Manhattan seeking the father she had never known. But are Kate and Cooper ready for the secrets that will be revealed in the Forgotten Room?

READERS GUIDE INCLUDED
Karen White is the New York Times bestselling author of the Tradd Street series, The Night the Lights Went Out, Flight Patterns, The Sound of Glass, A Long Time Gone, and The Time Between, among other novels.

Beatriz Williams lives with her husband and children in Connecticut. She is the New York Times bestselling author of Along the Infinite Sea, Tiny Little Thing, The Secret Life of Violet Grant, A Hundred Summers, and Overseas. She also writes under the pseudonym Juliana Gray.

Lauren Willig is the New York Times bestselling author of The Lure of the Moonflower, That Summer, and The Other Daughter, among other novels.
Praise for The Forgotten Room

“Even with three authors, the story is seamless, and the transitions between narrators are smooth. Focusing on both a family and a single location throughout time makes for a compelling and emotionally worthwhile novel.”—Kirkus Reviews

“A trio of authors seamlessly blend three stories into one epic novel. Spanning a century and three lives, this sumptuous, suspenseful and heart-wrenching story will keep you up all night. Each story stands on its own, with strong characters and a compelling storyline, but it is impossible to know where one writer starts and another begins. Readers will be utterly enthralled.”—RT Book Reviews (4½ Stars, Top Pick)