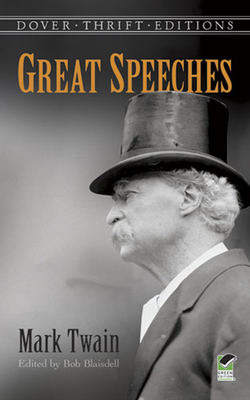 
Unavailable
In addition to being one of America's greatest novelists and humorists, Mark Twain (1835-1910) was a captivating public speaker. Once he became an established author with an enthusiastic following, Twain earned a substantial part of his income by conducting lecture tours. This compilation brings together a generous selection of his best speeches, highlighting his legendary wit and powers of wry observation.
Twain was reputed to have possessed a modern stand-up comedian's mastery of timing and delivery and to have understood his medium completely. He preferred to give the impression that he was speaking off the cuff, but he also often handed out advance copies of his speeches to journalists to be sure that they would quote him accurately -- and get the jokes right. Among these speeches are his famous 70th birthday address delivered at a gala 1905 event in his honor at New York's Delmonico's Restaurant; his classic address on Plymouth Rock and the Pilgrims, with which he entertained a meeting of Philadelphia's New England Society in 1881; and the perennial favorite, Horrors of the German Language, delivered at the Vienna Press Club in 1897.
After the Civil War, Samuel Clemens (1835-1910) left his small town to seek work as a riverboat pilot. As Mark Twain, the Missouri native found his place in the world. Author, journalist, lecturer, wit, and sage, Twain created enduring works that have enlightened and amused readers of all ages for generations.An English professor at the City University of New York's Kingsborough College, Bob Blaisdell is the editor of numerous Dover Thrift Editions and regularly reviews books for The San Francisco Chronicle and The Christian Science Monitor.