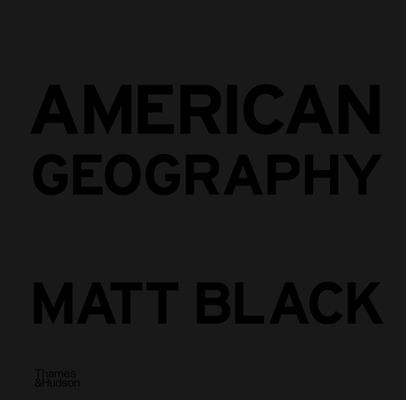 When Magnum photographer Matt Black began exploring his hometown in California’s rural Central Valley—dubbed “the other California,” where one-third of the population lives in poverty—he knew what his next project had to be. Black was inspired to create a vivid portrait of an unknown America, to photograph some of the poorest communities across the US. Traveling across forty-six states and Puerto Rico, Black visited designated “poverty areas,” places with a poverty rate above 20 percent, and found that poverty areas are so numerous that they’re never more than a two-hour’s drive apart, woven through the fabric of the country but cut off         from “the land of opportunity.” American Geography is a visual record of this five-year, 100,000-mile road trip, which chronicles the vulnerable conditions faced by America’s poor.

This compelling compilation of black-and-white photographs is accompanied by Black’s own travelogue—a collection of observations, overheard conversations in cafe´s and public transportation, diner menus, bus timetables, historical facts, and snippets from daily news reports. A future classic of photography, this monograph is supported by an international touring exhibition and is a must-have for anyone with an interest in witnessing the reality of an America that’s been excluded from the American Dream.

Matt Black is a member of Magnum Photos. He was named TIME magazine’s Instagram Photographer of the Year in 2014 and has received the W. Eugene Smith Grant and two Robert F. Kennedy Journalism Awards.
Visceral... Like [Robert] Frank’s 'The Americans,' Black’s contrasty, chiaoscuro photographs and travelogue reveal the hard truths: the United States in the 21st Century remains a country deeply divided and astonishingly poor... Black, like other committed photographers before him, is revealing to us who we are as Americans. It is up to us now to see.

The photographs presented here by Black provide the same tenderness [as Lange and Evans]: carefully selected work that narrowly threads the needle. He gestures, never points. He empathizes, but does not pity. The photographs are remarkable... a lovely body of work.
— New York Journal of Books

The images are so vivid and riveting that you can't help but be drawn to them and the questions they ask... An essential document for our increasingly unsteady times.
— The Washington Post

These unforgettable photos of poverty challenge the idea of the American Dream... they call to mind the work of earlier documentarians who looked critically at American society, such as Robert Frank. Black wants the viewer to realize that this is what the details of inequality look like on the ground, and that it is the norm, not the exception, for a large swath of citizens.
— Buzzfeed News

A deafening boom that lays bare the harsh reality of inequality in America.
— TIME (one of the Best Photobooks of 2021)

The disconcerting reality that Black’s compassionate yet sober eye reveals may be too uncomfortable for the casual viewer. Yet the images contained within American Geography and the subtle way these images are edited commands our attention and tells a story that demands to be seen.

Compelling... As with his powerful photos, Black's written notebook entries offer simple, moving descriptions of the people he meets on his travels.
— Daily News (Los Angeles)