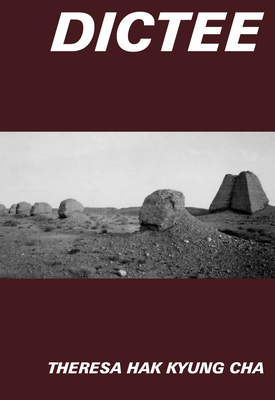 
Usually Ships in 1-5 Days
Newly restored, this version of Theresa Hak Kyung Cha’s masterpiece honors the author's original intentions and vision for the book. Originally published in 1982, Dictee is a classic of modern Asian American literature.

This restored edition, produced in partnership with the Berkeley Art Museum and Pacific Film Archive (BAMPFA), reflects Cha’s original vision for the book as an art object in its authentic form, featuring:
Dictee tells the story of several women: the Korean revolutionary Yu Guan Soon, Joan of Arc, Demeter and Persephone, Cha’s mother Hyung Soon Huo (a Korean born in Manchuria to first-generation Korean exiles), and Cha herself.

This dynamic autobiography:
The result is an enduringly powerful, beautiful, unparalleled work.
Theresa Hak Kyung Cha (1951–1982) was a poet, filmmaker, and artist who earned her BA and MA in comparative literature and her BA and MFA in art from the University of California, Berkeley.
"With the original cover and high-quality interior layout as Cha had designed them, this [restored edition] is the most aesthetically appealing edition of the five that have been produced."
— Asian Review of Books