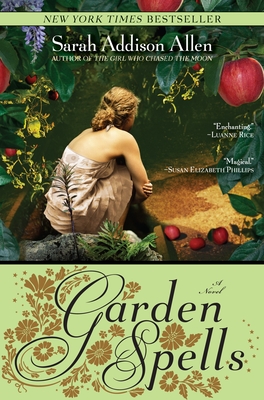 
Unavailable
In a garden surrounded by a tall fence, tucked away behind a small, quiet house in an even smaller town, is an apple tree that is rumored to bear a very special sort of fruit. In this luminous debut novel, Sarah Addison Allen tells the story of that enchanted tree, and the extraordinary people who tend it. . . .

The Waverleys have always been a curious family, endowed with peculiar gifts that make them outsiders even in their hometown of Bascom, North Carolina. Even their garden has a reputation, famous for its feisty apple tree that bears prophetic fruit, and its edible flowers, imbued with special powers. Generations of Waverleys tended this garden. Their history was in the soil. But so were their futures.

A successful caterer, Claire Waverley prepares dishes made with her mystical plants—from the nasturtiums that aid in keeping secrets and the pansies that make children thoughtful, to the snapdragons intended to discourage the attentions of her amorous neighbor. Meanwhile, her elderly cousin, Evanelle, is known for distributing unexpected gifts whose uses become uncannily clear. They are the last of the Waverleys—except for Claire’s rebellious sister, Sydney, who fled Bascom the moment she could, abandoning Claire, as their own mother had years before.

When Sydney suddenly returns home with a young daughter of her own, Claire’s quiet life is turned upside down—along with the protective boundary she has so carefully constructed around her heart. Together again in the house they grew up in, Sydney takes stock of all she left behind, as Claire struggles to heal the wounds of the past. And soon the sisters realize they must deal with their common legacy—if they are ever to feel at home in Bascom—or with each other.

Enchanting and heartfelt, this captivating novel is sure to cast a spell with a style all its own. . . .
Sarah Addison Allen lives in Asheville, North Carolina, where she is at work on her next novel.
“It’s refreshing to find a Southern novel that doesn’t depend on folksy humor or stereotypes but instead on the imaginative use of magical realism. Just buy it, read it, and recommend it to others.”—Library Journal, starred review

“Garden Spells is so tender and enchanting, it drew me in on page one, and held me captivated—without letting me go for even a minute—until the end. I fell in love with Sarah Addison Allen’s writing, and her world. She believes in love, and that’s her magic: She conjures a garden of moon vine and angel’s trumpet, fills it with characters who need each other, and writes so well you’ll never forget any of them.”—Luanne Rice

“Sarah Addison Allen has crafted a wonderful story that will cast a spell on everyone who has the pleasure of reading it. Garden Spells has a harvest of rich characters, a plot that will have you checking what you eat, and a heart that is overflowing with the tangled joys and sorrows of love and life.” —Kris Radish

“Garden Spells is a rare and mesmerizing novel, brimming with light and fierce joy and the sharp shadows that must accompany such a tale. I desperately want to go live in Bascom and fall asleep in the Waverleys’ garden and let the magic and sweetness fill my every hour with its heady sense of possibility. So will you. This is one of the most charming books I’ve read in ages!” —Barbara Samuel

“Garden Spells is truly spellbinding, beautifully crafted and as bewitching as the title suggests. This is Southern charm at its most beguiling, with characters you’ll take to your heart, a delicious love story, and a magical garden you’ll wish was in your own backyard. I devoured it in one sitting and was left eagerly awaiting Sarah Addison Allen’s next novel.”—Eileen Goudge

“Charming.... [Imbued] with a Southern charm that readers won't want to resist any more than they would Claire's violet cake.”—Christian Science Monitor