In the Company of Light (Concord Library) (Paperback) 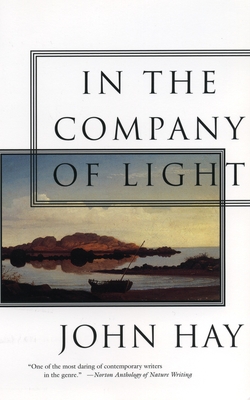 In the Company of Light (Concord Library) (Paperback)


Usually Ships in 1-5 Days
John Hay is author of The Great Beach (winner of the John Burroughs Prize), The Run, and A Beginner's Faith in Things Unseen, among many other books. He lives in Brewster, on Cape Cod in Massachusetts, and in Bremen, Maine.
One of the most daring of contemporary writers in the genre. --Norton Anthology of Nature Writing

"Hay's new book, published in his 83rd year, is autumnal in spirit and in substance. . . . The essence of this enterprise is a kind of prayer, eloquent and deeply felt." --Richard Todd, Civilization

"[Hay] is, to my mind, without question this country's greatest living nature writer. . . . He writes out of such a profoundly poetic impulse that he cannot help but produce prose of a high literary order." --Robert Finch, The Cape Codder

"Hay loses himself in details, describing the minute play of light through grasses, the reflection of a water bug on the rocks of a stream bottom, the fungi on fallen trees that begin to glow with an eerie luminescence. . . . [He] is not only the observer of what most of us don't see, but of what we may never get a chance to see." --David Cline, Hartford Advocate

"In the Company of Light shares with considerable humility the well-honed insights of a man rich in the wisdom of age and observation of nature."--Nancy Grape, Maine Sunday Telegram