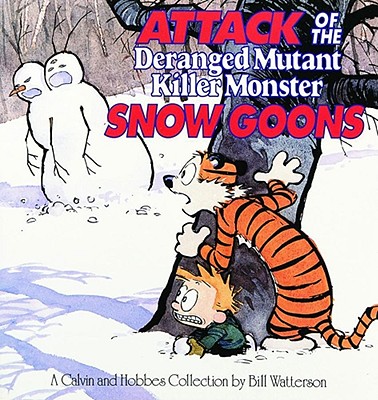 This is book number 10 in the Calvin and Hobbes series.

Calvin and Hobbes are back in another thrilling adventure involving escapes from girls, parents, and snow goon monsters.

In Attack of the Deranged Mutant Killer Monster Snow Goons, Calvin suffers a host of hardships. He gets attacked by his new two-wheeler bike. Hobbes gets kidnapped by Susie, a slimy girl. His father cancels Calvin's personal TV network. Self-multiplying deranged mutant killer monster snow goons threaten to take over the yard. And if that wasn't enough, the ethicated duplicate of Calvin's good side wreaks havoc with his reputation by doing good deeds.

Yet Calvin conquers all with his irrepressible spirit and a little help from alter-egos Spaceman Spiff, Stupendous Man, and Tracer Bullet, private eye. Readers are delighted by Calvin's resourceful wit, which applies to everything from philosophical speculations to attempts to outsmart his parents.
Bill Watterson is the creator of Calvin and Hobbes, one of the most popular and well-regarded cartoon strips of the twentieth century. Calvin and Hobbes appeared in newspapers from November 1985 until Watterson's retirement in 1995.

gocomics.com/calvinandhobbes/
"At some level, all American childhoods are the same, which probably explains our lasting love affair with Calvin and Hobbes." (Timothy R. Smith, The Washington Post)

"Bill Watterson's 'Calvin and Hobbes,' easily one of the most beloved comic strips of all time..." (Bryan Hood, New York Post)

"A student of comics, Watterson drew from an eclectic set of influences...The result was a strip that was vibrant, accessible, and beautiful." (Jake Rossen, Mental Floss)