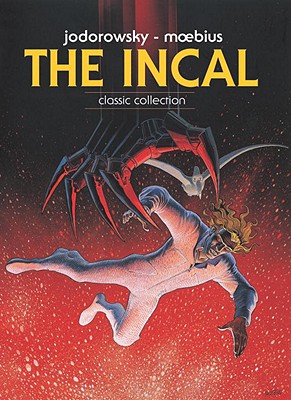 The world-renowned dystopian sci-fi comic from the creative duo of legendary illustrator Moebius and filmmaker, writer and composer Alejandro Jodorowsky.

Employed to chaperone a young female aristo in the city's lawless lower regions, Difool becomes lost and stumbles into an adventure of aliens, mystery, and universal mayhem. Inexorably drawn into events of cosmic proportions, John Difool must decide how to be a hero with the fate of the galaxy in his hands.

Moebius (Jean Giraud) has earned worldwide fame and a lifetime of awards for his awe-inspiring and meticulously-detailed comics art. He also contributed substantially to the sets of iconic movies such as Ridley Scott's "Alien," James Cameron's "The Abyss," "TRON" and "The Fifth Element."

In "The Incal" his classic illustrations perfectly compliment the immense scale and scope of Jodorowsky's story.

Alejandro Jodorowsky has been venerated by cult cinema enthusiasts for his movies, particularly "El Topo." "The Incal," lauded by some as "the best comic book ever written," is a powerhouse for Jodorowsky's celebrated imagination, wicked humor, and outrageous storytelling style.

"It's quite simply one of the most perfect comics ever conceived." - Mark Millar, writer of Kick-Ass & The Ultimates