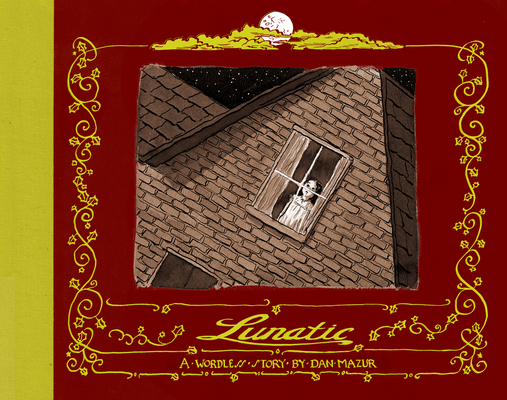 
Email or call for price
MOONSTRUCK

“Lunatic” is an unusual and striking graphic novel in the tradition of wordless books by the likes of Frans Masereel, Lynd Ward and William Gropper. Part fable, part classic adventure in the tradition of Jules Verne, H. G. Wells and Méliès, the tale is told in nearly 200 full-page, wordless images in a variety of media from pencil, pen and ink, ink wash and paint that lovingly evoke the artistic styles of its period setting, and classic illustrators from Charles Dana Gibson and Toulouse Lautrec to Edward Gorey. The word “lunatic” derives from Latin, meaning “of the moon”, or “moonstruck” and in this sense it describes the protagonist of this story: from infancy she develops a magical, almost intimate relationship with the moon itself, a celestial being who acts as her friend, lover, mentor. Our heroine is a dreamer, an outsider, never feeling like she quite belongs to this world. We follow her through the stages of life, infancy, childhood, youth and adulthood, at each point guided by the moon toward a fateful journey and an unexpected destiny. A timeless and charming story of longing, loneliness and the pursuit of dreams.

Dan Mazur is an independent cartoonist, editor, journalist and screenwriter. His comics have appeared in anthologies including I Saw You, Inbound, Wake Up! and Colonial Comics. He is the co-writer with Alexander Danner of Comics: A Global History, 1968 to the Present published by Thames & Hudson. He wrote the comic Cold Wind, included as a notable in The Best American Comics of 2013. He is co-founder of the Boston Comics Roundtable, and MICE: the Massachusetts Independent Comics Expo, and founder of Ninth Art Press. He has edited the comics anthologies, Inbound, Show and Tell, In a Single Bound, The Greatest of All Time Comics Anthology and Boston Powers, and is publisher of SubCultures, What's Your Sign Girl? and The Shirley Jackson Project. He was a creative director at Lawrence Gordon Productions and Vice President of Creative Affairs at Largo Films. As a screenwriter, his produced credits include Brave New World (Universal Television/NBC), Virtual Nightmare (UPN) and Night of the Scarecrow (Republic Pictures).