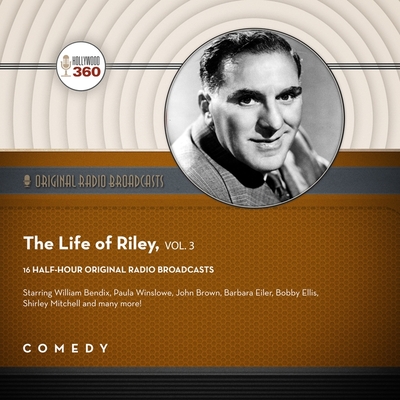 By Black Eye Entertainment, A. Full Cast (Read by)

Riley's penchant for turning mere trouble into near disaster through his well-intentioned bumbling was often aided or instigated by his best friend, Jim Gillis ... and radio listeners howled with laughter

Created by Irving Brecher, the popular family sitcom The Life of Riley featured the comic misadventures of Chester A. Riley, an inept blue-collar factory worker and father of two, played by screen actor William Bendix. Riley's wife, Peg, tried in vain to prevent her hot-headed husband's interventions, which usually ended in an embarrassing revelation. With a tendency to try and solve non-existent problems, Riley sought advice from his best friend, Gillis, but this only led to misunderstandings. Help came from Digger O'Dell, the "friendly undertaker," who offered gruesome theories laced with repetitive puns, brilliantly delivered by John Brown. In 1949, Universal Studios released a Life of Riley motion picture, and later that same year NBC produced a TV version with Jackie Gleason playing Riley (Bendix was unable to play the role due to a contract dispute). After twenty-six episodes, Gleason left the series and William Bendix resumed the role he'd made famous. Enjoy sixteen hilarious radio episodes of The Life of Riley starring William Bendix as Riley, with Paula Winslowe as Peg.