Cometh the Hour: Book Six Of the Clifton Chronicles (Paperback) 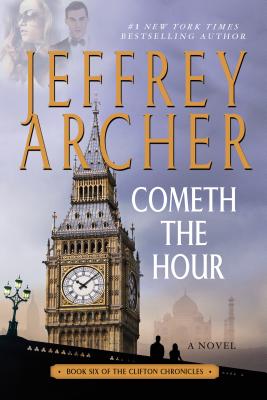 Cometh the Hour: Book Six Of the Clifton Chronicles (Paperback)

This is book number 6 in the The Clifton Chronicles series.

Cometh the Hour is the penultimate book in the Clifton Chronicles and, like the previous novels - all of which hit the New York Times bestseller list - showcases Jeffrey Archer's extraordinary storytelling with his trademark twists.

It opens with the reading of a suicide note, which has devastating consequences for Harry and Emma Clifton, Giles Barrington and Lady Virginia. Giles must decide if he should withdraw from politics and try to rescue Karin, the woman he loves, from behind the Iron Curtain. But is Karin truly in love with him, or is she a spy?

Lady Virginia is facing bankruptcy, and can see no way out of her financial problems, until she is introduced to the hapless Cyrus T. Grant III from Baton Rouge, Louisiana, who's in England to see his horse run at Royal Ascot.

Sebastian Clifton is now the Chief Executive of Farthings Bank and a workaholic, whose personal life is thrown into disarray when he falls for Priya, a beautiful Indian girl. But her parents have already chosen the man she is going to marry. Meanwhile, Sebastian's rivals Adrian Sloane and Desmond Mellor are still plotting to bring him and his chairman Hakim Bishara down, so they can take over Farthings.

Harry Clifton remains determined to get Anatoly Babakov released from a gulag in Siberia, following the international success of his acclaimed book, Uncle Joe. But then something unexpected happens that none of them could have anticipated.

JEFFREY ARCHER was educated at Oxford University. He served five years as a Member of Parliament in the House of Commons and has served twenty-seven years as a Member of the House of Lords. Now published in 97 countries and more than 37 languages, all of his novels and short story collections—including Kane & Abel, Only Time Will Tell and This Was a Man—have been international bestsellers. Jeffrey is married with two sons and three grandchildren, and lives in London, Cambridge and Majorca.