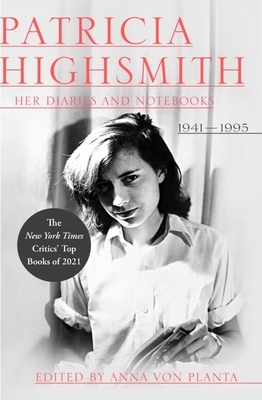 The Times (of London) • Best Books of the Year

Excerpted in The New Yorker

Profiled in The Los Angeles Times

Publishing for the centenary of her birth, Patricia Highsmith’s diaries “offer the most complete picture ever published” of the canonical author (New York Times).


Relegated to the genre of mystery during her lifetime, Patricia Highsmith is now recognized as one of “our greatest modernist writers” (Gore Vidal). Beloved by fans who were unaware of the real psychological turmoil behind her prose, the famously secretive Highsmith refused to authorize a biography, instead sequestering herself in her Switzerland home in her final years. Posthumously, her devoted editor Anna von Planta discovered her diaries and notebooks in 1995, tucked in a closet—with tantalizing instructions to be read.

For years thereafter, von Planta meticulously culled from over eight thousand pages to help reveal the inscrutable figure behind the legendary pen. Beginning with her junior year at Barnard in 1941, Highsmith ritualistically kept a diary and notebook—the former to catalog her day, the latter to brainstorm stories and hone her craft. This volume weaves diary and notebook simultaneously, exhibiting precisely how Highsmith’s personal affairs seeped into her fiction—and the sheer darkness of her own imagination.

Charming yet teetering on the egotistical, young “Pat” lays bare her dizzying social life in 1940s Greenwich Village, barhopping with Judy Holliday and Jane Bowles, among others. Alongside Flannery O’Conner and Chester Himes, she attended—at the recommendation of Truman Capote—the Yaddo artist colony in 1948, where she drafted Strangers on a Train. Published in 1950 and soon adapted by Alfred Hitchcock, this debut novel brought recognition and brief financial security, but left a heartsick Highsmith agonizing: “What is the life I choose?”

Providing extraordinary insights into gender and sexuality in mid-twentieth-century America, Highsmith’s diaries convey her euphoria writing The Price of Salt (1951). Yet her sophomore novel would have to be published under a pseudonym, so as not to tarnish her reputation. Indeed, no one could anticipate commercial reception for a novel depicting love between two women in the McCarthy era. Seeking relief from America, Highsmith catalogs her peripatetic years in Europe, subsisting on cigarettes and growing more bigoted and satirical with age. After a stay in Positano with a new lover, she reflects in her notebooks on being an expat, and gleefully conjures the unforgettable The Talented Mr. Ripley (1955); it would be this sociopathic antihero who would finally solidify her true fame.

At once lovable, detestable, and mesmerizing, Highsmith put her turbulent life to paper for five decades, acutely aware there must be “a few usable things in literature.” A memoir as significant in our own century as Sylvia Plath’s journals and Simone de Beauvoir’s writings were to another time, Patricia Highsmith: Her Diaries and Notebooks is an historic work that chronicles a woman’s rise against the conventional tide to unparalleled literary prominence.

Patricia Highsmith (1921–1995) was the author of more than twenty novels, including Strangers on a Train, The Price of Salt and The Talented Mr. Ripley, as well as numerous short stories.

Anna von Planta has been Highsmith’s primary editor since the 1980s.
The whole book is excellent. Highsmith is pointed and dry about herself and everything else. But the early chapters are special. They comprise one of the most observant and ecstatic accounts I’ve read — and it’s a crowded field! — about being young and alive in New York City.
— Dwight Garner - New York Times

The boldest of von Planta’s editorial decisions has been to bring the diary and cahier entries together, “interwoven and interlocked”.... It works well.... Patricia Highsmith’s lacerating diaries and notebooks... will be seen as one of the great twentieth-century artistic self-portraits.
— Frances Wilson - New York Review of Books

The Diaries... record [Highsmith's] exultation upon realizing the kind of murder-minded writer that she is.... Exemplary.... [Highsmith's] great contribution to the mystery genre turns out to be nothing else than her diaries and journals.

To immerse yourself in [Highsmith's] private sphere, which she willingly discloses (she knew her writing would be read and published one day) is breath-taking.
— Alexandra Schwartzbrod - Libération

Now, in the year of her 100th birthday – Patricia Highsmith was born on January 19, 1921 – a 1,000 page volume of her intimate diaries and notebooks (1941-1995) is being released, which allows a close-up look of this astonishing destiny: ruled by the passion to write, crowned by success and ground down by disastrous love affairs.
— Josyane Savigneau - Les Echos Week-End

Highsmith’s company, while reading these diaries, is fascinating. It means slipping from the joyous effervescence of a youth spent in Mad Men Manhattan (smoky bars, cocktails, nightly encounters and hidden loves) to misanthropy and disillusion in Switzerland.

In these diaries and notebooks, one gets to know unknown sides to the crime writer: the lyrical, ecstatic and aphoristic.
— Tobias Gohlis - Die Zeit

Reading Patricia Highsmith's diary entries filled me with a joy that goes beyond the thrill of such a literary treasure being published for the first time after almost thirty years.
— Anuschka Roshani - Das Magazin zum Tages-Anzeiger

Offer[s] intimate insights into a writer’s soul – and into [Highsmith's] attempt to write a lesbian novel, which she published under a pseudonym in 1952.
— Welt am Sonntag

Her writing owes everything to this attitude: of confronting the world armed with a steel needle.
— Claudia Voigt - Spiegel

The Highsmith community has been eagerly awaiting this moment: The Diaries and Notebooks are finally being published.

[Her Diaries and Notebooks] testify to the recalcitrant, unrelenting spirit of this great American curmudgeon and gifted crime writer.

More than 50 years of the novelist’s diaries and notebooks have been assembled in this volume, painstakingly annotated for context by Highsmith’s longtime editor Von Planta . . . An exceptional effort . . . Sure to be a resource for future scholars . . . offering a frank and detailed account of a woman and writer coming of age.
— Asa Drake, Library Journal, starred review

A quarter century after the death of novelist Highsmith (1921–1995), fans are given a fascinating and unprecedented look into the ‘playground for [her] imagination’ . . . Devotees and historians alike will linger over every morsel.
— Publishers Weekly