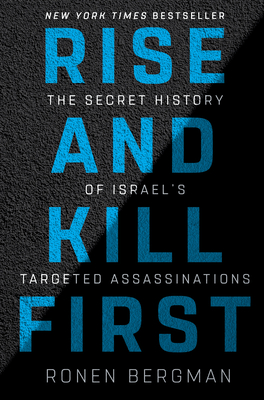 
Usually Ships in 1-5 Days
NEW YORK TIMES BESTSELLER • The first definitive history of the Mossad, Shin Bet, and the IDF’s targeted killing programs, hailed by The New York Times as “an exceptional work, a humane book about an incendiary subject.”

WINNER OF THE NATIONAL JEWISH BOOK AWARD IN HISTORY

The Talmud says: “If someone comes to kill you, rise up and kill him first.” This instinct to take every measure, even the most aggressive, to defend the Jewish people is hardwired into Israel’s DNA. From the very beginning of its statehood in 1948, protecting the nation from harm has been the responsibility of its intelligence community and armed services, and there is one weapon in their vast arsenal that they have relied upon to thwart the most serious threats: Targeted assassinations have been used countless times, on enemies large and small, sometimes in response to attacks against the Israeli people and sometimes preemptively.

In this page-turning, eye-opening book, journalist and military analyst Ronen Bergman—praised by David Remnick as “arguably [Israel’s] best investigative reporter”—offers a riveting inside account of the targeted killing programs: their successes, their failures, and the moral and political price exacted on the men and women who approved and carried out the missions.

Bergman has gained the exceedingly rare cooperation of many current and former members of the Israeli government, including Prime Ministers Shimon Peres, Ehud Barak, Ariel Sharon, and Benjamin Netanyahu, as well as high-level figures in the country’s military and intelligence services: the IDF (Israel Defense Forces), the Mossad (the world’s most feared intelligence agency), Caesarea (a “Mossad within the Mossad” that carries out attacks on the highest-value targets), and the Shin Bet (an internal security service that implemented the largest targeted assassination campaign ever, in order to stop what had once appeared to be unstoppable: suicide terrorism).

Including never-before-reported, behind-the-curtain accounts of key operations, and based on hundreds of on-the-record interviews and thousands of files to which Bergman has gotten exclusive access over his decades of reporting, Rise and Kill First brings us deep into the heart of Israel’s most secret activities. Bergman traces, from statehood to the present, the gripping events and thorny ethical questions underlying Israel’s targeted killing campaign, which has shaped the Israeli nation, the Middle East, and the entire world.

“A remarkable feat of fearless and responsible reporting . . . important, timely, and informative.”—John le Carré
Ronen Bergman is the senior correspondent for military and intelligence affairs for Yedioth Ahronoth, Israel’s largest daily paid newspaper, and a contributing writer for The New York Times Magazine, where he reports on intelligence, national security, terrorism, and nuclear issues. Bergman is the author of five bestselling Hebrew-language nonfiction books and The Secret War with Iran, which was published in the United States by Free Press. Bergman is the recipient of the Sokolow Prize, Israel’s most esteemed award for journalism, and the B’nai B’rith International Press Award, among other honors. A member of the Israeli bar, he graduated with honors from the University of Haifa Faculty of Law and clerked in the attorney general’s office. A winner of a Chevening Scholarship from the British Foreign Office, he received a master’s in international relations from Cambridge University, where he was also awarded his PhD in history.
“Ronen Bergman has set out in incontestable detail the history and scale of Israel’s use of extrajudicial killing as an instrument of defense and foreign policy. His material is stark and sensational, but he steers a steady course through it, even pausing along the way to debate the effectiveness and morality of his subject. The result is a compelling read whatever your point of view.”—John le Carré

“This remarkable account of Israel’s targeted-killing programs is the product of nearly eight years of research into what is arguably the most secretive and impenetrable intelligence community in the world. Bergman, an investigative reporter and military analyst, interviewed hundreds of insiders, including assassins, and obtained thousands of classified documents.”—The New Yorker

“America’s difficult relationship with targeted killing and the dilemmas we may face in the future are beautifully illuminated by the longer story of Israel’s experiences with assassination in its own endless war against terrorism. . . . Americans now have a terrific new introduction to that story with publication of Ronen Bergman’s Rise and Kill First. . . . It moves at a torrid pace and tells stories that would make Jason Bourne sit up and say ‘Wow!’ It is smart, thoughtful and balanced, and the English translation is superb. It deserves all of the plaudits it has already received.”—The New York Times Book Review

“Blending history and investigative reporting, Bergman never loses sight of the ethical questions that arise when a state, founded as a refuge for a stateless people who were targets of a genocide, decides it needs to kill in order to survive. . . . This book is full of shocking moments, surprising disturbances in a narrative full of fateful twists and unintended consequences.”—The New York Times

“Authoritative . . . a chilling portrait of the evolution of the assassination program . . . Bergman has a reputation as an indefatigable journalist who has developed hundreds of informed sources in the defense establishment over the past two decades. . . . Since World War II, Bergman calculates, the Jewish state and its pre-state paramilitary organizations have assassinated more people than any other country in the Western world.”—The Washington Post

“A textured history of the personalities and tactics of the various secret services . . . makes the case that Israel has used assassination in the place of war, killing half a dozen Iranian nuclear scientists, for instance, rather than launching a military attack . . . [Bergman] says that while the [United States] has tighter constraints on its agents than does Israel, President George W. Bush adopted many Israeli techniques after the terrorist attacks of September 11, 2001, and President Barack Obama launched several hundred targeted killings.”—Bloomberg

“Leading any list of notable nonfiction books—Jewish or not—must be Ronen Bergman’s Rise and Kill First, a massive and extravagantly well-sourced history of the use of the tool of assassination by Israel’s intelligence services. . . . One’s mouth is often agape with amazement, even shock, while reading.”—Haaretz