Touchstone Anthology of Contemporary Creative Nonfiction: Work from 1970 to the Present (Paperback) 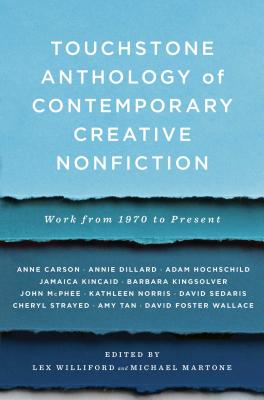 Touchstone Anthology of Contemporary Creative Nonfiction: Work from 1970 to the Present (Paperback)


Usually Ships in 1-5 Days
From memoir to journalism, personal essays to cultural criticism, this indispensable anthology brings together works from all genres of creative nonfiction, with pieces by fifty contemporary writers including Cheryl Strayed, David Sedaris, Barbara Kingsolver, and more.

Selected by five hundred writers, English professors, and creative writing teachers from across the country, this collection includes only the most highly regarded nonfiction work published since 1970.

Michael Martone has taught at Iowa State University, Harvard University, and Syracuse University. He is currently teaching at the University of Alabama, where he has directed the MFA Program in Creative Writing. Double-wide: Collected Fiction is his eighth book of stories. Racing in Place, his third book of nonfiction, will be published in 2008. He has edited six other volumes of prose including the Touchstone Anthology of Contemporary Creative Nonfiction with Lex Williford. He lives in Tuscaloosa, Alabama.