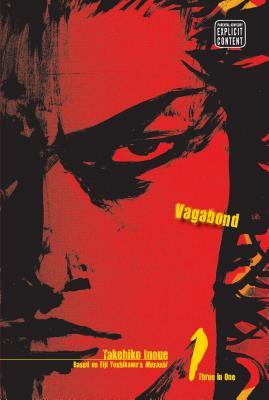 This is book number 1 in the Vagabond VIZBIG Edition series.

Real-life figure Miyamoto Musashi was the most celebrated samurai of all time. The quintessential warrior-philosopher, Musashi authored A Book of Five Rings, a classic treatise in the canon of world philosophy and military strategy. But the path to enlightenment is an endless journey, and to get there through violent means--by way of the sword--makes mere survival an even greater challenge.

Invincible Under the Sun

At seventeen years of age, Miyamoto Musashi--still known by his childhood name, Shinmen Takezō--was a wild young brute just setting out along the way of the sword.

In the aftermath of the epic Battle of Sekigahara, Takezō finds himself a fugitive survivor on the losing side of the war. Takezō's vicious nature has made him an outcast even in his own village, and he is hunted down like an animal. At this crucial crossroads in Takezō's life, an eccentric monk and a childhood friend are the only ones who can help him find his way.
Takehiko Inoue is the creator of one of the most popular manga of all time, Slam Dunk, which has sold over 100 million copies worldwide. He followed that series up with two titles lauded by critics and fans alike—Vagabond, a fictional account of the life of Miyamoto Musashi, and Real, a manga about wheelchair basketball. Inoue is the recipient of numerous awards, including the prestigious Tezuka Osamu Culture Award and the Media Arts Festival Award. In addition to his work on manga, Inoue has worked on television commercials, character designs for video games, and is the founder of a scholarship to foster Japanese basketball talent.