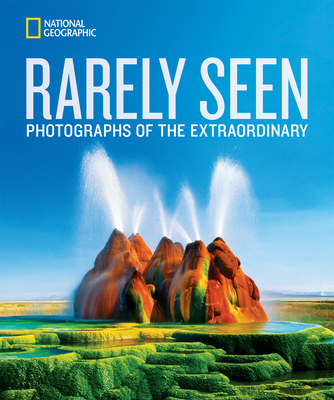 
Usually Ships in 1-5 Days
National Geographic's dazzling photography book of visual wonders, shot by some of the world's finest photographers, reveals a world very few will have the chance to see for themselves. This New York Times bestseller features striking images of places, events, natural phenomena, and manmade heirlooms seldom seen by human eyes. It's all here: 30,000-year-old cave art sealed from the public; animals that are among the last of their species on Earth; volcanic lightning; giant crystals that have grown to more than 50 tons; the engraving inside Abraham Lincoln's pocket watch. With an introduction by National Geographic photographer Stephen Alvarez, whose work has taken him from the Peruvian Andes to the deepest caves of Papua New Guinea, Rarely Seen captures once-in-a-lifetime moments, natural wonders, and little-seen objects from the far reaches of the globe.
STEPHEN ALVAREZ, who has captured some of the most rarely seen objects on earth, is a photojournalist who produces global stories about exploration, culture, religion, and the aftermath of conflict. He has been a National Geographic photographer since 1995. His pictures have won awards from Pictures of the Year International and Communication Arts and have been exhibited at Visa Pour l'Image International Photojournalism Festival in Perpignan, France. SUSAN TYLER HITCHCOCK is a senior editor in the Books Division of the National Geographic Society, where she is responsible for science, health, and nature titles. She has written 16 books, from literary history to personal memoir. This is the third National Geographic photography collection to which she has contributed. She lives in Covesville, Virginia.