A Storm Too Soon: A True Story of Disaster, Survival and an Incredible Rescue (Paperback) 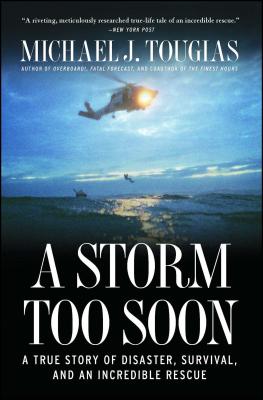 A Storm Too Soon: A True Story of Disaster, Survival and an Incredible Rescue (Paperback)


Usually Ships in 1-5 Days
A heart-stopping true-life tale of maritime disaster, survival, and daring rescue— “an edge-of-your-seat chronicle of what happens when a sailboat goes up against a fierce storm in the heart of the Gulf Stream” (The Providence Journal).

Seventy-foot waves batter a torn life raft 250 miles out to sea in one of the world’s most dangerous places, the Gulf Stream. Hanging on to the raft are three men: a Canadian, a Brit, and their captain, JP de Lutz, a dual citizen of the United States and France. Their capsized forty-seven-foot sailboat has disappeared below the tempestuous sea. The giant waves repeatedly toss the men out of their tiny vessel, and JP, with nine broken ribs, is hypothermic and on the verge of death.

Trying to reach these survivors before it’s too late are four brave Coast Guardsmen battling hurricane-force winds in their Jayhawk helicopter. With waves reaching an astounding eighty feet, lowering the helicopter into such chaos will be extremely dangerous. The pilots wonder if they have a realistic chance of saving the sailors or even retrieving their own rescue swimmer. Soon the rescuers find themselves in almost as much trouble as the survivors, facing one life-and-death moment after the next against the towering seas.

Also caught in the storm are three other boats, each one in a Mayday situation. Of the ten people on these boats, only six will ever see land again.

Spellbinding, harrowing, and meticulously researched, A Storm Too Soon is a vivid, heart-pounding narrative of survival, the power of the human spirit, and one of the most incredible rescues ever attempted.
Michael J. Tougias is the author of a number of books, including Rescue of the Bounty: Disaster and Survival in Superstorm Sandy; Overboard!; The Finest Hours (with Casey Sherman), the basis of the major motion picture released in 2016; Fatal Forecast; and Ten Hours Until Dawn: The True Story of Heroism and Tragedy Aboard the Can Do. He is a sought-after lecturer who gives more than seventy presentations each year. He lives in Massachusetts.
“The riveting, meticulously researched “A Storm Too Soon” tells the true-life tale of an incredible rescue”
— New York Post

"A heart-pounding account of the storm that tore apart a 45-foot sailboat." -The Boston Globe

“A magnificent culmination of what-ifs with such detail as to inspire reverence for the human spirit. Tougias’ use of present tense is ingenious, this is an armchair riptide of the reading experience.”
— South Coast Magazine

"Michael Tougias has done it again, this time delivering an edge-of-your-seat chronicle of what happens when a sailboat goes up against a fierce storm in the heart of the Gulf Stream."
— The Providence Journal

“It’s a story of heroism, for sure (the captain, despite being seriously injured and near death, kept his two shipmates alive), but also of sheer terror. Cast adrift in the angry seas, the men seemed to have little chance of survival. Readers of true-life adventures, especially those involving disaster and rescue at sea, should find this one very much to their liking.”
— Booklist

"Deserves a place as a classic survival at sea."
— The Boston Globe

"This book captures the wit, grit and sacrifice of Coasties and their boats." -- Minneapolis Star Tribune

“A compelling tale of man versus nature”
— Yachts Magazine

“To read this book is to become a believer in the unbelievable. Few stories are as harrowing.”
— Oregon Coast Weekend

“Tougias tells the story in the present tense, giving the story a gut-wringing immediacy that makes the book hard to put down.”
— Metrowest Daily

"The Finest Hours is a touching account, a sensitive rendering of what might be called four indescribably chaotic conditions...Tougias and Sherman never sensationalize, never go beyond the facts, and yet capture all the pain, physical and emotional, of the survivors and their families." -- Providence Journal

"Tougias deftly switches from heart-pounding details of the rescue to the personal stories of the boat’s crew and those of the rescue team. The result is a well-researched and suspenseful read."
— Publisher's Weekly