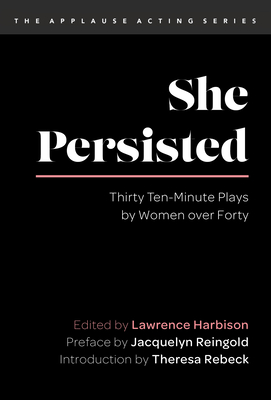 
Usually Ships in 1-5 Days
She Persisted: Thirty Ten-Minute Plays by Women over Forty is a collection of plays by members of Honor Roll , an advocacy group of women over forty. About Honor Roll : Honor Roll is an advocacy and action group of women+ playwrights over forty--and our allies--whose goal is our inclusion in theater. The term women+ refers to a spectrum of gender identification that includes women, non-binary identifiers, and trans. We are the generation excluded at the outset of our careers because of sexism, now overlooked because of ageism. We celebrate diversity in theater, and work to call attention to the negative impact of age discrimination alongside gender, race, ethnicity, faith, socioeconomic status, disability, and sexual orientation in the American Theatre and beyond. These women are in their forties and fifties and sixties, and they have been writing a long time, and they are at the height of their craft. These are tight, complex, nuanced pieces of writing, which no one has seen because for too long they weren't looking. These are important writers, and important plays. --Theresa Rebeck, from the introduction.
Lawrence Harbison was in charge of new play acquisitions for Samuel French, Inc., for over thirty years. He edits annual anthologies of best plays by new playwrights and women playwrights, best ten-minute plays, and monologues for men and for women. His column, On the Aisle with Larry, is a regular feature at www.applausebooks.com. Harbison was a member of the Drama Desk Nominating Committee for the 2010-2011 and 2011-2012 seasons. He works with individual playwrights to help them develop their plays (see his website: www.playfixer.com). Harbison is the editor of Best Contemporary Monologues for Women, Best Contemporary Monologues for Men, and Best Contemporary Monologues for Kids, also from Applause, who published his book How I Did It: Establishing a Playwriting Career in 2015.