The Port Huron Statement: The Vision Call of the 1960s Revolution (Paperback) 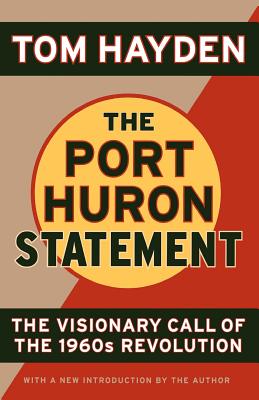 The Port Huron Statement: The Vision Call of the 1960s Revolution (Paperback)


Usually Ships in 1-5 Days
"We seek the establishment of a democracy of individual participation governed by two central aims: that the individual share in those social decisions determining the quality and direction of his life; that society be organized to encourage independence in men and provide the media for their common participation . . ." -- from the Port Huron Statement

Four key periods in American history have most influenced what America is like today: the Revolutionary War, the Civil War, World War II, and the 1960s. No document better frames and explains the 1960s than the Port Huron Statement.

The statement was a generational call for direct participatory democracy in which Americans would have greater say over the decisions affecting their lives. It called for the extension of democratic principles to the workplace as well as the electoral arena. It opposed the dominance of the military-industrial complex with the hope that social movements could reform the Democrats as a party of progressive opposition. In its vision greater democracy would lessen individuals' alienation.

The manifesto's 1962 publication preceded the phenomena of the counter-culture, hippies and back-to-the-land. It is truly the intellectual roots of the social change of the 1960s and its impact is still being felt in 2005. In "The Big Lebowksi," the character played by Jeff Bridges claimed authorship; it was condemned by right-wing justice Robert Bork, recalled with nostalgia by Garry Wills and E.J. Dionne, and sections have been printed in countless readers on American history.
Tom Hayden has been a leader of anti-war, civil rights, and environmental movements in America since the 1960s. He drafted the famous "Port Huron Statement" for Students for a Democratic Society.

A California State Senator for eighteen years, he is the author and editor of many books including Reunion: A Memoir; Irish Hunger; and Irish on the Inside: In Search of the Soul of Irish-America; Trial; The American Future, and The Lost Gospel of the Earth.