The Book of Rumi: 105 Stories and Fables that Illumine, Delight, and Inform (Paperback) 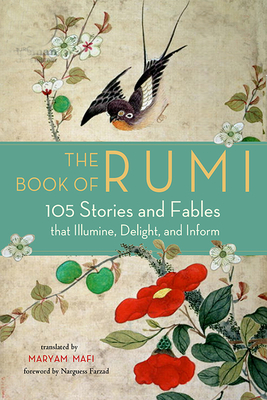 The Book of Rumi: 105 Stories and Fables that Illumine, Delight, and Inform (Paperback)

By Rumi, Maryam Mafi (Translated by), Narguess Farzad (Foreword by)

Philip Pullman, author of 'His Dark Materials' trilogy, has remarked that "after nourishment, shelter, and companionship, stories are the thing we need most in the world." This new collection of Rumi stories fills that need.

This fresh prose translation of 105 short teaching stories by Rumi, which form the core of the six-volume Masnavi, explores the hidden spiritual aspects of everyday experience. Rumi transforms the seemingly mundane events of daily life into profound Sufi teaching moments. These prose gems open the mystical portal to the world of the ancient mystic.

These stories include well-known and popular tales such as "Angel of Death," "The Sufi and His Cheating Wife," "Moses and the Shepherd," "Chickpeas," and "The Greek and Chinese Painters" as well as the less commonly quoted parables: "The Basket Weaver," "The Mud Eater," and "A Sackful of Pebbles."

Rumi's voice alternates between playful and authoritative, whether he is telling stories of ordinary lives or inviting the discerning reader to higher levels of introspection and attainment of transcendent values. Mafi's translations delicately reflect the nuances of Rumi's poetry while retaining the positive tone of all of Rumi's writings, as well as the sense of suspense and drama that mark the essence of the Masnavi.

Rumi was a 13th-century Persian Muslim poet, jurist, theologian, and Sufi mystic.  Maryam Mafi was born and raised in Iran. She went to Tufts University in the U.S. in 1977 where she studied Sociology and Literature. While reading for her Master's degree in International Communications at American and Georgetown Universities she began translating Persian literature and has been doing so ever since. Reading Rumi's poetry, she says, has led her to a 're-education' in her own language and a new appreciation of her spiritual heritage.  Narguess Farzad is the Senior Tutor in the Faculty of Languages and Culture at the University of London.
“Maryam Mafi’s luminous translation brings the Persian poet Rumi’s distinctive and timeless Sufi lessons to a new audience, transforming the original verses into prose that conveys the vibrancy of the medieval setting while also sounding fresh. This beautifully produced volume is a welcome introduction to a classic poet’s work.” – Foreword Reviews
— Foreword Reviews