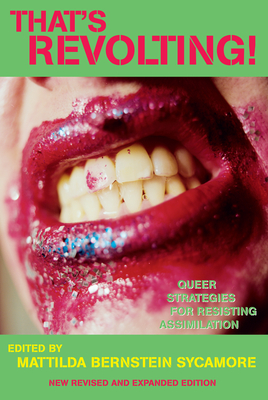 
Usually Ships in 1-5 Days
As the gay mainstream prioritizes the attainment of straight privilege over all else, it drains queer identity of any meaning, relevance, or cultural value, writes Matt Bernstein Sycamore, aka Mattilda, editor of That's Revolting! . This timely collection shows what the new queer resistance looks like. Intended as a fistful of rocks to throw at the glass house of Gaylandia, the book challenges the commercialized, commodified, and hyperobjectified view of gay/queer identity projected by the mainstream (straight and gay) media by exploring queer struggles to transform gender, revolutionize sexuality, and build community/family outside of traditional models. Essays include “Dr. Laura, Sit on My Face,” “Gay Art Guerrillas,” “Legalized Sodomy Is Political Foreplay,” and “Queer Parents: An Oxymoron or Just Plain Moronic?”
Mattilda Bernstein Sycamore is the author of three novels and a memoir, and the editor of five nonfiction anthologies. Her memoir, The End of San Francisco, won a Lambda Literary Award, and her anthology, Why Are Faggots So Afraid of Faggots?: Flaming Challenges to Masculinity, Objectification, and the Desire to Conform, was an American Library Association Stonewall Honor Book. Her novel Sketchtasy was one of NPR’s Best Books of 2018. Her book The Freezer Door is out now. Maggie Nelson says it's "a book about not belonging that made me feel deeply less alone."