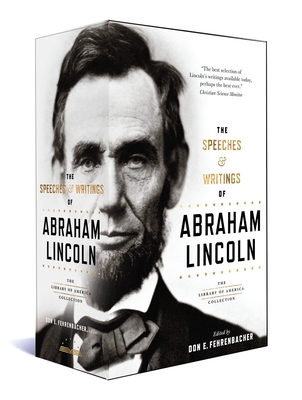 Abraham Lincoln, America's heroic Civil War president, was also the greatest writer ever to occupy the White House. His addresses at Gettysburg and at his inaugurals, his presidential messages and public lectures, are an essential record of the war and have forever shaped the nation's memories of it. This deluxe two-volume boxed set gathers Abraham Lincoln: Speeches and Writings 1832-1858 and Abraham Lincoln: Speeches and Writings 1859-1865, first published in 1990, which together have been hailed as "the best selection of Lincoln's writings available today, perhaps the best ever" (Christian Science Monitor). Edited by the late historian Don E. Fehrenbacher, these two books include all Lincoln's significant works from the entirety of his public life, including both sides of the complete Lincoln-Douglas debates, dozens of speeches, hundreds of personal and political letters, communications to the generals in the field, presidential messages and proclamations, poems, and private reflections on democracy, slavery, and the meaning of the Civil War's immense suffering. This is the definitive Lincoln for the general reader, "a momentous and thrilling addition to any private library" in the words of the great literary critic Alfred Kazin.

LIBRARY OF AMERICA is an independent nonprofit cultural organization founded in 1979 to preserve our nation’s literary heritage by publishing, and keeping permanently in print, America’s best and most significant writing. The Library of America series includes more than 300 volumes to date, authoritative editions that average 1,000 pages in length, feature cloth covers, sewn bindings, and ribbon markers, and are printed on premium acid-free paper that will last for centuries.
Abraham Lincoln (1809-1865) was the sixteenth president of the United States, guiding the nation through the Civil War before becoming one of its final vicitims, assasinated at Ford's Theater in Washington on April 15, 1865, less than a week after the surrender of the Confederate army at Appomattox.

Don E. Fehrenbacher (1920-1997) was professor of history at Stanford University. He was the author of several books, including Prelude to Greatness: Lincoln in the 1850's, The Dred Scott Case: Its Significance in American Law and Politics, and Lincoln in Text and Context.
"The best selection of Lincoln's writings available today, perhaps the best ever." -- The Christian Science Monitor