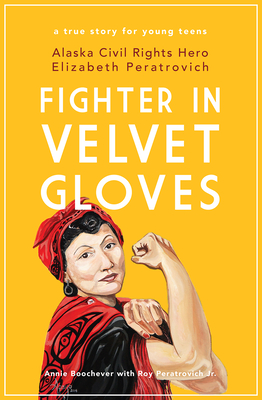 
Usually Ships in 1-5 Days
“No Natives or Dogs Allowed,” blared the storefront sign at Elizabeth Peratrovich, then a young Alaska Native Tlingit. The sting of those words would stay with her all her life. Years later, after becoming a seasoned fighter for equality, she would deliver her own powerful message: one that helped change Alaska and the nation forever.
In 1945, Peratrovich stood before the Alaska Territorial Legislative Session and gave a powerful speech about her childhood and her experiences being treated as a second-class citizen. Her heartfelt testimony led to the passing of the landmark Alaska Anti-Discrimination Act, America’s first civil rights legislation. Today, Alaska celebrates Elizabeth Peratrovich Day every February 16, and she will be honored on the gold one-dollar coin in 2020.
Annie Boochever worked with Elizabeth’s eldest son, Roy Peratrovich Jr., to bring Elizabeth’s story to life in the first book written for young teens on this remarkable Alaska Native woman.
Annie Boochever grew up in Juneau, where she became a teacher and playwright. She is the cofounder of the Alaska Children’s Theater. She is also the author of Bristol Bay Summer. She lives in Bellingham, Washington.
“With a rousing speech to the Alaskan Territorial Legislature in 1945, Elizabeth Peratrovich became a Tlingit hero, inspiring the passage of an anti-discrimination bill. In straightforward prose enhanced by photographs, Boochever outlines the history of Peratrovich’s fight for equality in Alaska at a time when harsh discrimination affected every area of Native peoples’ lives.”
— Kirkus

“I highly recommend Fighter in Velvet Gloves. Some readers will be uncomfortable to read about the racism directed at Alaska Native people. Accounts like these mess with the idea that this country is exceptional, that it is (or was) ‘great.’ These accounts have received very little attention in children's or young adult literature—but they're very important. Change is possible, but only when problems are identified and made visible.”
— Debbie Reese

“An important contribution. . . . This is a book that should be placed in the required curriculum of all Alaska schoolchildren. More importantly, it’s one that should be read by adults. Anyone who peruses online comments on Alaska news sites or who follows state news stories knows that racism is still being directed towards Alaska Natives. The problem persists and Elizabeth Peratrovich’s work remains incomplete. It’s up to us to continue the job. Fighter in Velvet Gloves explains why.”
— Anchorage Daily News