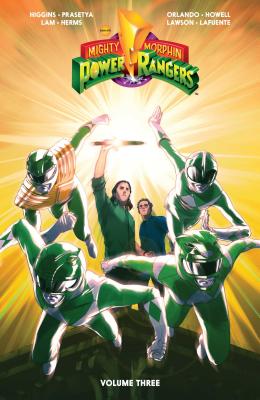 
Usually Ships in 1-5 Days
The Green Ranger and Blue Ranger are lost in a mysterious world, as the rest of our heroes must try and track them down.

Tommy and Billy are lost in a mysterious land without their powers. With the world reeling after Rita’s attacks, Jason, Kimberly, Zack, Trini, and Alpha 5 must do all they can to save Zordon, and bring their missing friends home.

Kyle Higgins is a #1 New York Times Best Selling writer whose past work includes NIGHTWING, BATMAN ETERNAL, GATES OF GOTHAM, BATMAN BEYOND 2.0, and DEATHSTROKE. After spending two years at the University of Iowa, Kyle transferred to Chapman University where he co-wrote and directed a superhero noir titled THE LEAGUE, about the 1960's superhero labor union of Chicago. In addition to opening doors at Marvel Comics, the film served as a creative launch point for Kyle's 2014 Image Comics series, C.O.W.L..

At present, Kyle is working on several creator owned titles at Image, including the upcoming HADRIAN'S WALL, as well as MIGHTY MORPHIN POWER RANGERS at Boom!