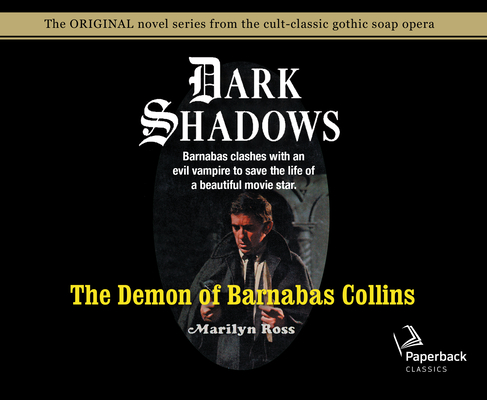 This is book number 8 in the Dark Shadows series.

The Demon of Barnabas Collins (April 1969)

The arrival of a movie company at Collinwood gives Barnabas a chance to escape Angelique’s awful curse—the curse which has made him one of the living dead.
Barnabas meets and falls in love with beautiful film star, Rita Glenn. In order to save him, she introduces him to the mysterious Dr. Moreno who has a cure for Barnabas.
Barnabas is jubilant over his recovery—but not for long. Suddenly he is in a life and death battle with another vampire—with Rita’s life at stake. The only way to save her is to return to the curse once again.
​
This is the first book to present Barnabas in a heroic vein rather than as the villain, following the trend set by the television series.
Marilyn Ross is the pseudonym for William Edward Daniel “W.E.D.” Ross (November 16, 1912 - November 1, 1995) was a Canadian actor, playwright and bestselling writer of more than 300 novels in a variety of genres. He was known for the speed of his writing and was by some estimates the most prolific Canadian author ever, though he did not take up fiction until middle age.