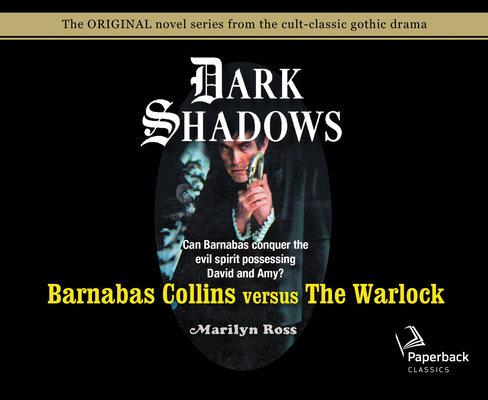 This is book number 11 in the Dark Shadows series.

Barnabas Collins Vs. the Warlock (October 1969)

David Collins and Amy Jennings, two charming, innocent children are suddenly turned into demons. At first their pranks only annoy Maggie Evans, their governess. But soon she realizes they have become malicious, bent on destroying all of Collinwood.

Convinced the children are possessed by a mysterious, supernatural power, and frightened for her life, Maggie turns for help to Barnabas Collins.

Will his powers be strong enough to overcome the evil forces that captured the minds of the children before they—and Barnabas—are completely at the mercy of the devil himself?
Marilyn Ross is the pseudonym for William Edward Daniel “W.E.D.” Ross (November 16, 1912 - November 1, 1995) was a Canadian actor, playwright and bestselling writer of more than 300 novels in a variety of genres. He was known for the speed of his writing and was by some estimates the most prolific Canadian author ever, though he did not take up fiction until middle age.