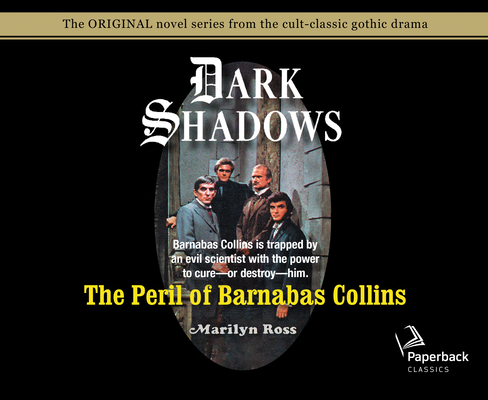 This is book number 12 in the Dark Shadows series.

The Peril of Barnabas Collins (November 1969)

After falling in love with beautiful heiress Diana Hastings, Barnabas Collins makes a desperate attempt to find a cure for his vampire curse. He summons to Collinwood Dr. Rudolf Padrel, a strange scientist who claims he can develop a serum that will make Barnabas a normal man again.

But as time passes, Barnabas wonders if the mysterious scientist isn’t merely using him for his own evil ends. Graves in the family cemetery are desecrated and a young girl is found murdered. Barnabas is denounced by the villagers, who try to storm Collinwood.

Though he knows Dr. Padrel is responsible, Barnabas hesitates to expose him. Can he risk destroying the one man who can cure him?

Marilyn Ross is the pseudonym for William Edward Daniel “W.E.D.” Ross (November 16, 1912 - November 1, 1995) was a Canadian actor, playwright and bestselling writer of more than 300 novels in a variety of genres. He was known for the speed of his writing and was by some estimates the most prolific Canadian author ever, though he did not take up fiction until middle age.