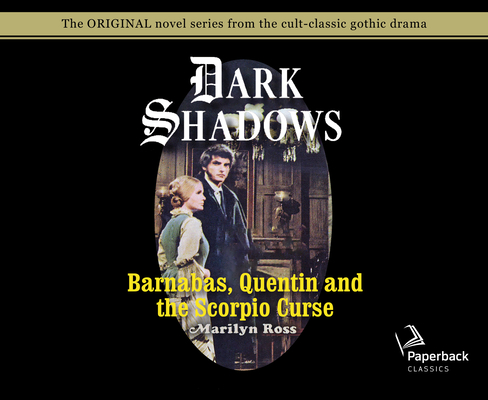 This is book number 23 in the Dark Shadows series.

Is the sign of Scorpio the mark of death?

Terror reigns at Collinwood when several patients at a nearby psychiatric clinic at which Barnabas Collins is a patient are stabbed to death. Each victim’s forehead is marked with a scorpion, the zodiacal symbol of death.

Then Diana Collins, another relative of the Collins family who is undergoing psychiatric treatment at the hospital, finds a bloody knife in her room. Diana, whose astrological sign is Scorpio, is afraid that she may have committed the murders during one of her blackouts. The fear that she is losing her mind is compounded when no one will believe she has seen a strange, wolf-like creature prowling the grounds.

The only person who will listen to her story is Barnabas. But how can he help her when he too has become a suspect?
Marilyn Ross is the pseudonym for William Edward Daniel “W.E.D.” Ross (November 16, 1912 - November 1, 1995) was a Canadian actor, playwright and bestselling writer of more than 300 novels in a variety of genres. He was known for the speed of his writing and was by some estimates the most prolific Canadian author ever, though he did not take up fiction until middle age.