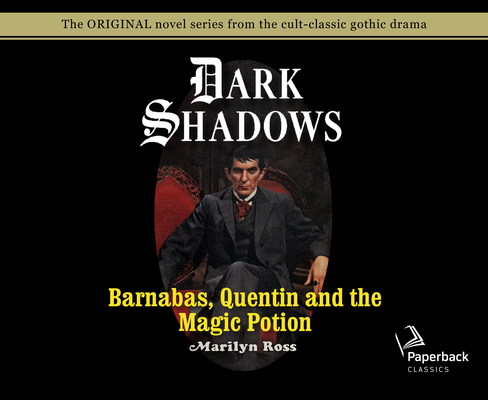 This is book number 25 in the Dark Shadows series.

This story marks a sudden shift in the characterization of Quentin Collins, who up to this point in the range had been portrayed as an enemy of Barnabas. Barnabas predicts trouble for Collinwood when Nicholas Freeze, in whose antique shop Carolyn Stoddard works, discovers a centuries-old potion that promises eternal youth. Soon after, Mr. Freeze’s daughter, Hazel, tricked into taking a serum, dies. Carolyn is grief-stricken over her friend’s death. Barnabas insists she stay on at the shop to watch Nicholas Freeze and his associates, one of whom Carolyn suspects is Quentin Collins, back at Collinwood in a disguise.

She interprets this as a warning that Mr. Freeze has marked her for his next victim. Barnabas still refuses to let her quit.

Has Barnabas made a fatal mistake by deliberately endangering Carolyn’s life? Or will his plan avenge Hazel’s murder and put her spirit to rest?
Marilyn Ross is the pseudonym for William Edward Daniel “W.E.D.” Ross (November 16, 1912 - November 1, 1995) was a Canadian actor, playwright and bestselling writer of more than 300 novels in a variety of genres. He was known for the speed of his writing and was by some estimates the most prolific Canadian author ever, though he did not take up fiction until middle age.