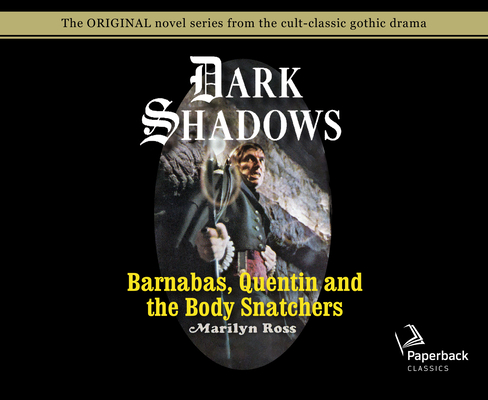 This is book number 26 in the Dark Shadows series.

In an alien spaceship hidden in a swamp near Collinwood, Roger Collins and his friend, space scientist Murdock Gray, lie bound and gagged—yet no one even knows they are missing! For their captors are able to change shapes at will, and two of them have “become” Roger and Murdock. Although Elizabeth and Carolyn sense a difference, they can’t guess that they are at the mercy of beings who will stop at nothing to prevent the next U.S. space flight under Murdock’s direction.

​Then, as the dark shadow of death draws closer to Collinwood, a bat soars over the hidden spaceship, flies close enough to see inside… and suddenly Barnabas and Quentin Collins find themselves joined in a desperate attempt to save Collinwood from the strangest menace it has ever known!
Marilyn Ross is the pseudonym for William Edward Daniel “W.E.D.” Ross (November 16, 1912 - November 1, 1995) was a Canadian actor, playwright and bestselling writer of more than 300 novels in a variety of genres. He was known for the speed of his writing and was by some estimates the most prolific Canadian author ever, though he did not take up fiction until middle age.