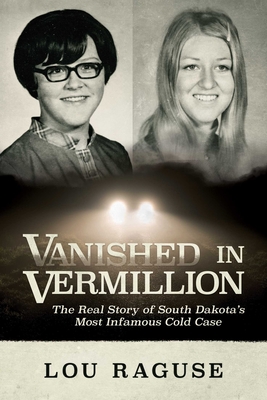 
Coming Soon - Available for Pre-Order Now
The result of hundreds of interviews, Vanished in Vermillion is a cold case story that flips the script on a typical investigation narrative, revealing the biggest law enforcement embarrassment in South Dakota history.

In May 1971, Pam Jackson and Sherri Miller were two seventeen-year-olds driving to an end-of-the-school-year party in a rundown Studebaker Lark when they seemingly disappeared off the face of the earth. Police back then didn’t do enough to try and find them. Investigators thirty years later did too much. Two families endure decades of pain as they await answers of what happened to their girls. When a third family is pulled into the mystery, they quickly learn their nightmare is just beginning.

“Lou’s terrific storytelling and investigative skills give the reader a front-row seat as he unravels this bizarre case, chock-full of twists and turns.”
—Caroline Lowe, veteran crime journalist and member of the FindJodi team
Lou Raguse is a journalist based in Minnesota specializing in crime and courts. Since 2005, he’s reported for local NBC, CBS, and FOX affiliates in Minnesota, New York, Arizona, and South Dakota.

Early in his career, Raguse developed a niche for crime reporting and has covered national cases such as the murder of George Floyd and the resulting trials, the shooting of Congresswoman Gabrielle Giffords, and the kidnapping and escape of thirteen-year-old Jayme Closs.

Besides countless regional Emmys and other broadcast news awards, Raguse produced an eight-part podcast on the Closs case, 88 Days: The Jayme Closs Story, which won an Edward R. Murrow award and was a top-ten performer on the iTunes podcast charts.

Outside of work, Raguse loves backyard barbeques with his family, playing fantasy football, and hunting down vintage Star Wars toys for his two kids.