Unexpected: The Backstory of Finding Elizabeth Smart and Growing Up in the Culture of an American Religion (Hardcover) 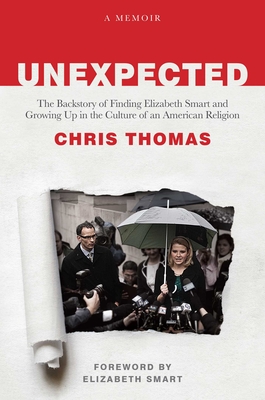 Unexpected: The Backstory of Finding Elizabeth Smart and Growing Up in the Culture of an American Religion (Hardcover)


Coming Soon - Available for Pre-Order Now
The backstory of finding Elizabeth Smart and how growing up in the Mormon culture pushed the author to develop the exact kind of intuition that was needed to help manage Elizabeth’s kidnapping and rescue while the world watched.

Chris Thomas is not yet thirty years old when he finds himself managing the immense pressure, eccentric personalities, and extenuating circumstances of an international story, where one small misstep could adversely impact the search for a missing teenager and the reputation of her family. Now, twenty years later, Thomas takes readers behind the scenes, providing new details, perspectives, and commentary on finding Elizabeth Smart.

In the process of reflecting on Elizabeth’s search and rescue, Thomas discovers how growing up in the culture of The Church of Jesus Christ of Latter-day Saints (commonly known as Mormon) helped push him to develop the exact kind of intuition needed to manage Elizabeth’s kidnapping and rescue, and to do so while the world watched.

Unexpected juxtaposes crucial events from the Smart case with Thomas’s experience growing up in the Latter-day Saint culture, including coming to understand the secret of a broken war hero before it was too late.
Chris Thomas is a writer, speaker, and communication professional. He is best known for his work as the Smart family publicist during the nine-and-a-half months Elizabeth was missing. In this capacity, he fielded more than ten thousand calls from journalists, served as a family spokesperson by completing hundreds of interviews, helped coordinate the Smart’s lobbying efforts for the national Amber Alert, and managed a crush of media when Elizabeth was rescued. John Walsh of America’s Most Wanted said that Thomas deserves most of the credit for keeping the public and family focused on finding Elizabeth.

Thomas also managed the trial and sentencing of Elizabeth’s abductors, helped position her as a leading child advocate, and managed Elizabeth’s engagement, her surprise wedding, the birth of her children, and the divorce of her parents.

In addition to Elizabeth, Thomas has managed more than three hundred crises for companies, nonprofits, government organizations, and families. He earned a bachelor’s degree in communication from Westminster College.