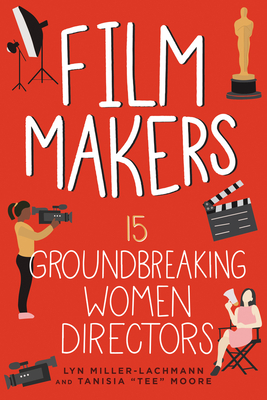 
Usually Ships in 1-5 Days
In Hollywood, women don't have to be in front of the camera to shine.

Each of the 15 women profiled in Film Makers shares a common trait: she is, as Shonda Rhimes says, “First. Only. Different.”

These phenomenal women have redefined the film and television industry, winning awards historically given to a male counterpart, being the only woman in a writers’ room, or portraying stories no one else could tell.

While their resumes are impressive, it is how they live their lives that has made a greater impact in the communities they serve. Many of them, like Gina Prince-Bythewood and Greta Gerwig, mentor other women. Some, like Agnieszka Holland and Chloé Zhao, have stood up to those who seek to ignore or silence them. All of them tell their stories with passion and integrity, serving as role models and champions for future generations.

We hope they will inspire you to use the tools of film to tell your story!
Lyn Miller-Lachmann is the former editor in chief of MultiCultural Review. Her young adult novel Gringolandia was a 2010 ALA Best Book for Young Adults and received an Américas Award Honorable Mention from the Consortium of Latin American Studies Programs. She is also the author of Surviving Santiago, Rogue, and Torch and the coauthor with Zetta Elliott of Moonwalking.

Tanisia “Tee” Mooreis the author of forthcoming books My Ancestors’ Wildest Dreams and Black Girl Magic as well as the forthcoming Micah Hudson series. She is also the co-owner of Moore and Young Legal Solutions, a virtual law firm based out of Birmingham, Alabama.
"Packed with fascinating film history, this informative book will inspire the next generation of women filmmakers. Look out, Hollywood!" —Susanna Reich, award-winning author of José! Born to Dance

"Aspiring directors or young film buffs will be inspired by the 15 women directors featured in this Women of Power series title."--Booklist