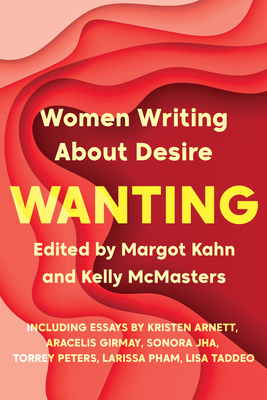 
Coming Soon - Available for Pre-Order Now
An intimate and empowering anthology of essays that explore the changing face of female desire in whip-smart, sensuous prose, with pieces by Tara Conklin, Camille Dungy, Melissa Febos, Lisa Taddeo, and others

What is desire? And what are its rules? How do we navigate the journey from the things we were brought up thinking we should want to figuring out what we actually do? In this fierce and daring collection, award-winning and emerging female writers from a range of experiences and backgrounds dismantle every formal notion of what desire is or can be.

In the opening essay, Larissa Pham unearths the ache beneath all her wants: time. Rena Priest’s desire for a pair of five-hundred-dollar cowboy boots spurs a reckoning with her childhood on the rez and the fraught history of her hometown. Other pieces in the collection turn cultural tropes around dating, sex, and romance on their heads—Angela Cardinale tries dating as a divorced mother of two in the California suburbs only to discover sweet solace in being alone; Keyanah B. Nurse finds power in polyamory; and when Joanna Rakoff spots a former lover at a bar, the heat between them unravels her family as she is pulled into his orbit—an undoing, she decides, that’s worth everything.

Including pieces by Tara Conklin, Torrey Peters, Camille Dungy, Melissa Febos, Lisa Taddeo, and so many others, these candid and insightful essays tackle the complicated knot of women’s desire.
MARGOT KAHN is the author of the biography Horses That Buck and co-editor of the anthology This Is the Place: Women Writing About Home. Her personal essays, book reviews and award-winning poems have appeared widely in print and online. She lives in Seattle with her family, where she directs the creative writing program at Hugo House.

KELLY McMASTERS is the author of the forthcoming The Leaving Season: A Memoir and Welcome to Shirley: A Memoir from an Atomic Town, the basis for the documentary film The Atomic States of America. She is coeditor, along with Margot Kahn, of This Is the Place: Women Writing About Home, and her essays and reviews have appeared in The New York Times, The Washington Post Magazine, The Paris Review Daily, The American Scholar, and River Teeth: A Journal of Nonfiction Narrative. McMasters is an essayist, professor, mother, and former bookshop owner living in New York.