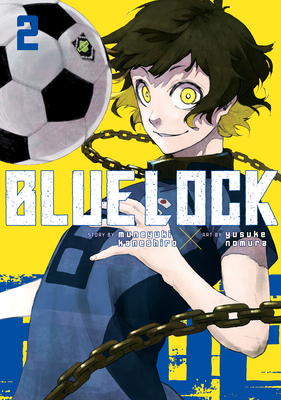 This is book number 2 in the Blue Lock series.

A mad young coach gathers soccer players from across the country to compete in a series of bizarre challenges in a high-tech colosseum he calls Blue Lock. It's a no-balls-barred battle to become Japan's next top striker, in this Squid Game–meets–World Cup manga, now available in print!

WILL YOU SHOOT WITHOUT HESITATION?

Yoichi Isagi, one of three hundred high school soccer players is in Team Z--the lowest ranked group in the controversial training facility, Blue Lock, where the aim is to create Japan's best striker. To survive their first round-robin tournament, Isagi's Team Z will need to find a way to use their unique "weapons," while struggling through a clash of egos. But Isagi grapples to understand what his strength is as a striker...
Muneyuki Kaneshiro broke out as creator of 2011's As the Gods Will, a death game story that spawned two sequels and a film adaptation directed by the legendary Takashi Miike. His latest work is the stylish and twisted soccer battle manga Blue Lock.