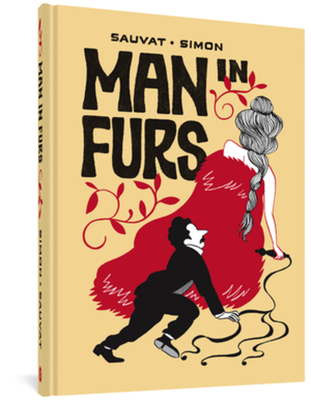 A graphic biography of Leopold von Sacher-Masoch, the author whose name came to define the tendency to derive pleasure, especially sexual gratification, from one's own pain or humiliation.

In 1870, Leopold von Sacher-Masoch published Venus in Furs, an erotic novel revealing the author's desire to be dominated by a woman. (And paid homage in the classic Velvet Underground song of the same name.) After the novel's success, a woman turns up at his doorstep and offers to take on the role in Sacher-Masoch's real life. He completely submits to her, and they get married. Years later, Leopold has remarried and lives a quiet life, far removed from the sexual escapades of his first marriage. Then he learns that his surname, to his detriment, has come to describe a new sexual perversion: masochism. Man In Furs is his story.

Franco-Austrian author Catherine Sauvat is an accomplished biographer (of such figures as Stefan Zweig, Arthur Schnitzler, Alma Mahler, Robert Walser, and more recently Rainer Maria Rilke). She also published books about the culture and architecture of several European capitals (including Venice, Vienna, and Prague). Man In Furs is her first graphic novel.

Mercedes Claire Gilliom is a French-to-English translator based in Marseille. Her translations of graphic literature have appeared in Words Without Borders, and are either published or forthcoming from Europe Comics, Glénat in English, and Humanoids, Inc.
A loving and lovely consideration of one of history’s influential sex-scene scribes.
— Publishers Weekly