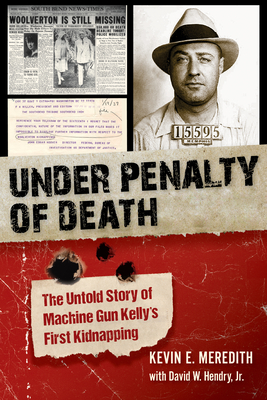 An FBI cover-up spanning nearly a century. A victim and his family sworn to secrecy. Machine Gun Kelly's first kidnapping, a crime that changed America before it was swept under the rug of history.

Under Penalty of Death: The Untold Story of Machine Gun Kelly's First Kidnapping brings to light for the first time the long-forgotten (and twice covered up) tale of the 1930s kidnapping that saved America from itself. In January 1932, Howard Arthur Woolverton, a wealthy industrialist in South Bend, Indiana, was kidnapped by Kelly and his gang. While no one was killed, the crime--occurring just six weeks before the Lindbergh kidnapping--nevertheless proved a watershed event, gripping the imagination of terrified Americans everywhere. The combined fallout of the two kidnappings helped usher in the federal law that shut down America's professional kidnapping industry for good. However, today Woolverton's name is forgotten, his story erased from public memory as if it had never happened. But why the cover-up? How did Woolverton quash the first investigation? Why did J. Edgar Hoover and his "G-Men" impose their own wall of silence? And how does it all connect with a bloody 1933 FBI screwup at a train station in Kansas City?

Drawing on a buried federal statement, family archives, extensive research through period newspaper accounts, and interviews with those few who still remember, Under Penalty of Death: The Untold Story of Machine Gun Kelly's First Kidnapping exposes intrigue and collusion in the era of gangsters, rampant crime, and the Great Depression.

Kevin Meredith worked as a reporter, editor, photographer, and columnist at newspapers in Hillsborough, North Carolina, and Savannah, Georgia, where he covered local politics, education, business, crime, and, when necessary, the weather. After seven years in journalism, he received a business degree and has since earned his keep in marketing, public relations, and technology sales. He is married and the father of three adult sons.