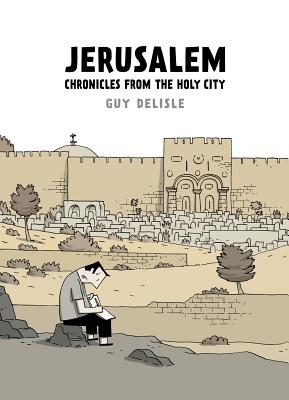 Jerusalem: Chronicles from the Holy City is the acclaimed graphic memoirist Guy Delisle's strongest work yet, a thoughtful and moving travelogue about life in contemporary Jerusalem. Delisle expertly lays the groundwork for a cultural road map of the Holy City, utilizing the classic "stranger in a strange land" point of view that made his other books required reading for understanding what daily life is like in cities few are able to travel to. Jerusalem explores the complexities of a city that represents so much to so many. It eloquently examines the impact of conflict on the lives of people on both sides of the wall while drolly recounting the quotidian: checkpoints, traffic jams, and holidays.

When observing the Christian, Jewish, and Muslim populations that call Jerusalem home, Delisle's drawn line is both sensitive and fair, assuming nothing and drawing everything. A sixteen-page appendix to the paperback edition lets the reader behind the curtain, revealing intimate process sketches from Delisle's time in Jerusalem.

Jerusalem is a masterfully hewn travelogue; topping Best of 2012 lists from The Guardian, Paste, and the Montreal Gazette, it was the graphic novel of the year.

Guy Delisle is the award-winning author of the travelogues "Burma Chronicles," "Jerusalem," "Pyongyang," and "Shenzhen "as well as the 2013 graphic novel "A User's Guide to Neglectful Parenting." He spent ten years working in animation, which allowed him to learn about movement and drawing, and he is now focusing on his cartooning. In 2008 2009, he accompanied his wife, an administrator for Doctors Without Borders, on a yearlong posting in Jerusalem. He lives in the south of France with his family."

“The cultural and physical barriers among the Jewish, Muslim and Christian communities become the source of dark but gentle comedy: absurdity teetering on the edge of tragedy.” —The New York Times

“The tone of [Jerusalem] is by turns gently humorous and dumbfounded. His drawing style . . . suits his brisk, snapshot approach.” —Financial Times