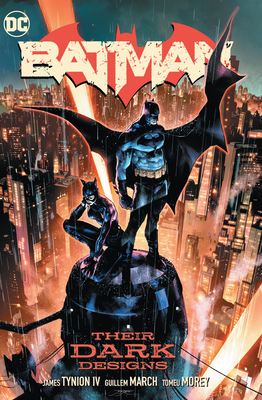 
Usually Ships in 1-5 Days
Who has designs on the Dark Knight?

It’s a new day in Gotham. Bane has been vanquished, but both the city and its champion are still struggling to pick up the pieces.

Deathstroke, the world’s greatest mercenary, is back in town under a new contract. Soon other hired killers follow, and Batman is surrounded by assassins—as well as Gotham’s own dangerous players, from the Riddler to the Penguin to Harley Quinn.

As the Caped Crusader draws closer to uncovering the figure pulling the strings, the love of his life, Catwoman, holds the sinister secret in her claws. Can Batman pry it from her without tearing their relationship apart? And will it be enough to stop the coming plot against him?

The start of a bold new chapter in the Batman saga unfolds from write JAMES TYNION IV and artists GUILLEM MARCH, TONY S. DANIEL, CARLO PAGULAYAN, JORGE JIMENEZ, and more. Collects stories from Batman #85-94 and Batman Secret Files #3, and features the debut of breakout character Punchline!
James Tynion IV started in the comics business assisting Scott Snyder in writing backup stories for Snyder's groundbreaking Batman series. Tynion soon began writing Talon, a series that spun out of the hugely popular "Batman: The Court of Owls" story line. He has also written Batman: Detective Comics, Constantine: The Hellblazer, and Red Hood and the Outlaws and is currently at the helm of Batman.