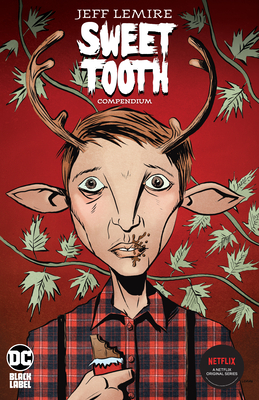 
Email or call for price
Now a Netflix Original Series!

An inexplicable plague has women giving birth to human-animal hybrid children all over the world. The deer-child Gus is left to fend for himself after his father dies, leaving him with more questions than answers. A cross between Bambi and Cormac McCarthy's The Road, Sweet Tooth follows the innocent journey of a young hybrid boy suddenly thrust out into a world no one can explain.

Collects issues #1-40 in a new story-only collection that places the reader directly into the action and doesn't let up until the very last page!
Award-winning Canadian cartoonist Jeff Lemire is the creator of the acclaimed monthly comic book series Sweet Tooth published by DC/Vertigo and the award-winning graphic novel Essex County published by Top Shelf. He also writes Animal Man, Frankenstein Agent of S.H.A.D.E., and Superboy for DC Comics. In 2008 Jeff won the Shuster Award for Best Canadian Cartoonist and the Doug Wright Award for Best Emerging Talent. He also won the American Library Association's prestigious Alex Award, recognizing books for adults with specific teen appeal. In 2010 Essex County was named as one of the five Essential Canadian Novels of the Decade. In 2013 Lemire published the graphic novel The Underwater Welder. He currently lives and works in Toronto with his wife and son.