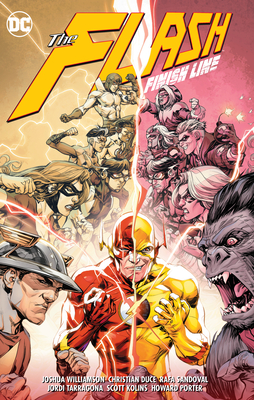 
Superstar writer Joshua Williamson’s 101-issue run on The Flash comes to a close, as Barry Allen faces the Reverse-Flash and the high-speed hero’s greatest rogues!

Forming a Legion of Zoom—including Captain Cold, the Turtle, Gorilla Grodd, and the Trickster—the Reverse-Flash sets out to not only beat Barry Allen, but also assume his life! Can the Fastest Man Alive keep up with the attacks around Central City when everyone and everything he loves is in danger? With his greatest enemy calling on Barry’s children from the future, the Tornado Twins, the Flash Family steps up to help the hero as he faces his biggest battle ever.

Joshua Williamson lives in Portland, Oregon. His career as a comics writer kicked off in 2007, and since then he has done a number of books for Shadowline, Image, Desperado Publishing, Kick Start, and DC Comics. He has written the Uncharted limited series based on the bestselling video game, Voodoo, and Marvel's Illuminati and Red Skull. He is currently writing The Flash and Batman/Superman for DC Comics.