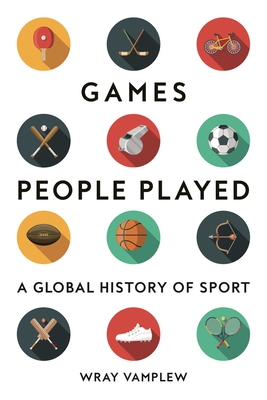 
Usually Ships in 1-5 Days
This first global history of sports offers all spectators and participants reason to cheer—and to think.

Games People Played is, surprisingly, the first global history of sports. The book shows how sports have been practiced, experienced, and made meaningful by players and fans throughout history. It assesses how sports developed and diffused across the globe, as well as many other aspects, from emotion, discrimination, and conviviality; politics, nationalism, and protest; and how economics has turned sports into a huge consumer industry. It shows how sports are sociable and health-giving, and also contribute to charity. However, it also examines their dark side: sports’ impact on the environment, the use of performance-enhancing drugs, and match-fixing. Covering everything from curling to baseball, boxing to motor racing, this book will appeal to anyone who plays, watches, and enjoys sports, and wants to know more of their history and global impact.
Wray Vamplew is professor emeritus of sports history at the University of Stirling and a global professorial fellow at the University of Edinburgh. His many books include How the Game Was Played: Essays In Sports History, and he was the general editor for the six-volume series Cultural History of Sport.
“Games People Played is the culmination of a life spent working on the history of sports, and it ranges far and wide. . . . Vamplew is as informative and comprehensive as one could want. . . . An outstanding guide to [sports] role in history.”
— Wall Street Journal

“A finely woven overview of important themes in sports history. Illustrating how sports are impactful to human societies in positive and negative ways, Vamplew draws on global examples from Western nations, Ancient Greece, and Indigenous communities from Central America to the Middle East and South Asia. Vamplew writes about the experiences of sports from elite to lower classes, and these perspectives expand the interpretations of sports in history... Readers interested in the history of sports in global context and the historical scholarship of sports will find much to pore over, and help in understanding the sociology and economics of sports and the evolving relationship between sports and people: players, sports officials, and spectators.”
— Booklist

"Compendious. . . . The book does have an underlying mission, which is to argue for sport to be taken seriously as an object of study. And it shows how deeply sport is embedded in culture. . . . to understand the present you need to know the past—in sport as in anything else. Cicero said that 'to be ignorant of what occurred before you were born is to remain always a child.' The study of games, Vamplew demonstrates, is very much for grown-ups."
— Sunday Times

“Vamplew’s book is a tour de force. It is for anyone who appreciates sport for what it is: at its best aspiring and inspirational, overcoming barriers of race, religion, color, creed, and politics and achieving adrenaline rushes of triumph and glory; at its worst, full of despair, heartache, and pain, frustration, rejection, and corruption. Games People Played is truly an enjoyable ‘must have’ for any sports fan, and indeed a necessity.”
— Gordon Taylor, OBE, chief executive of the Professional Footballers’ Association

“Academics typically undervalue the history of almost everything that's entertaining—food, dance, pop culture, fun. But these are activities that matter to people. And if you want to know how cultures differ, overlap, interweave, and conflict, study their sports. That's what Vamplew does, with insight, lucidity, scholarship, and sympathy. For understanding the global past I'd rather recommend Games People Played than any book of conventional political, social, or economic history.”
— Felipe Fernández-Armesto, William P. Reynolds Professor in Arts and Letters, University of Notre Dame

“Vamplew’s Games People Played is one of the smartest books written about sports. Not only does Vamplew detail the evolution of sports across cultures and countries, he thoughtfully discusses how sport historians do their jobs—sifting through documents, testing established myths, and searching for truth and meaning. For an American reader, conditioned by American sports, the book shows us how indebted we are to English and European sporting organizations. No one who reads the book will ever think of sports the same way.”
— Randy Roberts, Distinguished Professor of History, Purdue University, author of "A Team for America: The Army-Navy Game that Rallied a Nation"

‘‘In Games People Played, Vamplew gives us his distillation of the entire sweep of global sports history, from ancient times to the present. It’s an enormous accomplishment, rich in argument, telling details, and the demolition of myth. ‘We have to bear in mind that what was history to us was life to them,’ he writes. It’s an illuminating, enjoyable read for anyone who loves sports.”
— Bruce Kidd, OC, professor of sport and public policy, University of Toronto