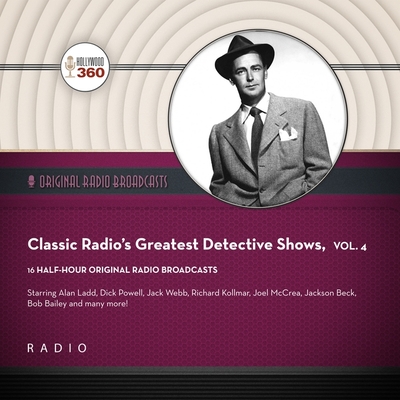 By Black Eye Entertainment, A. Full Cast (Read by)

Enjoy sixteen of the greatest detective shows from radio's Golden Age and the Hollywood celebrities that starred in them.

The Golden Age of radio had incredible detective shows that kept Americans glued to their radio sets. Families gathered around their living room radios to hear their favorite Hollywood stars voicing fiction's most famous gumshoes. This collection includes Dick Powell as suave detective Richard Diamond; Jack Webb as Sgt. Joe Friday on Dragnet; Richard Kollmar as "enemy to those who make him an enemy, friend to those who have no friend" on Boston Blackie; Alan Ladd as mystery writer turned amateur detective Dan Holiday on Box 13; Joel McCrea as Ranger Jace Pearson on Tales of the Texas Rangers; Jackson Beck as suave detective Philo Vance; Bob Bailey fills out another expense account on Yours Truly, Johnny Dollar; and many more